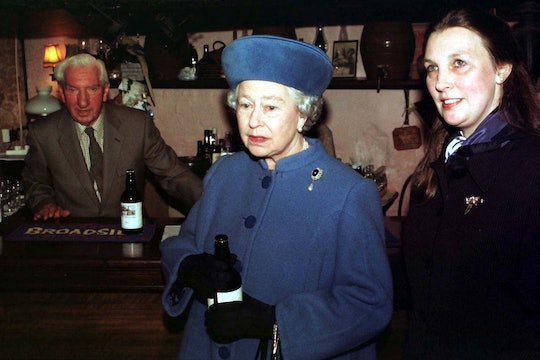 Listen, it’s no secret that Queen Elizabeth enjoys a tipple every now and then. A gin cocktail, a beer, a glass of wine. After a long day of being Her Majesty, what’s better than putting your royal feet up and having a drink? Oh I know, a secret tunnel between Her Majesty’s palace and a cool pub. Princess Eugenie’s husband Jack Brooksbank let the cat out of the bag about the tunnel, and now all I can picture is Queen Elizabeth carrying a torch to make her way to the bar for last call.

“There is one to Dukes Bar from St James's Palace,” Brooksbank told the Daily Mail about the amazing tunnel in an interview. “I haven't used it yet, but I'd love to check it out.” Brooksbank is a brand ambassador for Casamigos tequila, which is owned by George Clooney and Rande Gerber, so you would think he’d want to go running through that booze tunnel right away.

Dukes Bar is a popular, high end cocktail bar located in the Mayfair area of London, famous for their ambiance and martinis and snifters of cognac, obviously to be enjoyed with a cigar in the aptly named Cognac and Cigar Garden.

One can’t help but wonder if Dukes carries Queen Elizabeth’s own brand of beer and gin, created on palace grounds, as a bit of a nod to the royal family’s dedication to the legendary bar. Tunnels don’t dig themselves, after all.

Dukes Bar has a tunnel from St. James Palace.

The idea of a tunnel running from the palace to a bar might seem pretty wild to most of us, but the reality is that this isn’t even the first royal tunnel to be revealed. The White Drawing Room in Buckingham Palace rather famously features a door disguised as a big mirror and a cabinet. And it’s apparently only for the Queen herself to use. When Queen Elizabeth meets with the other members of the royal family ahead of official functions, that tends to be done in the White Drawing Room. And she can just sneak on up behind people after making her way through her hidden tunnel if she wants. That’s what I would want to do so I hope she does.

These tunnels are real eye-openers to Queen Elizabeth’s personality. One tunnel to go grab a cocktail at a swanky bar. The other being more of a James Bond-style trick. Now we know. Queen Elizabeth is basically James Bond.