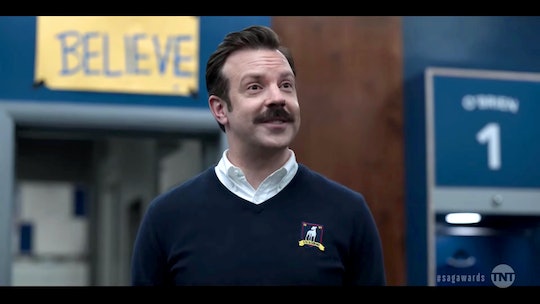 It’s a hairy job, but someone had to do it.

Jason Sudeikis absolutely nails the titular role in the Apple TV+ series, Ted Lasso, about an earnest football coach turned soccer coach living in the United Kingdom. With his iconic mustache and well-to-do personality, Sudeikis makes Ted an icon — he wouldn’t be Ted Lasso without either of them. But once filming was over, Jason Sudeikis’ daughter shaved his Ted Lasso mustache off just so he could recognize her.

The Emmy-winning actor shares two children — 8-year-old son, Otis, and 5-year-old daughter, Daisy — with his ex-fiancé, actress Olivia Wilde. During an appearance on The Ellen DeGeneres Show on Thursday, Sudeikis told the show’s host, Ellen DeGeneres, that Daisy shaved his mustache after Season 2 was done filming “just so she knew it was me,” he joked.

“But I paid her,” he added in the clip from the show. “She’s 5. She was actually 4 at the moment. But it was one of those clippers.” Very adorable, very Ted Lasso.

But Daisy isn’t the first person to give Sudeikis a trim. During a 2019 appearance on The Ellen DeGeneres Show, Wilde cut his long hair on TV, which he had been growing out for a movie at the time, according to People.

All that’s left is for their oldest son, Otis, to take part in the hair removal process. “I’m going to have Otis wax my chest,” he joked to DeGeneres on Thursday. “That’ll be the hardest gig of all. It’s a jungle down there.”

Hey, maybe that will happen after Season 3 of Ted Lasso premieres on Apple TV+ in summer 2022.

More Like This
Quinta Brunson Credits Her Parents For Her Confidence, Now & As A Kid
'Blockbuster's' Randall Park On Smashing The Model Minority Myth & Advocating For His Daughter With Autism
Hilary Duff Cut Her Daughter Mae’s Hair & Gave Her The Most Adorable Bangs
Jason Ritter's Family Cannot Appreciate His Culinary Talents