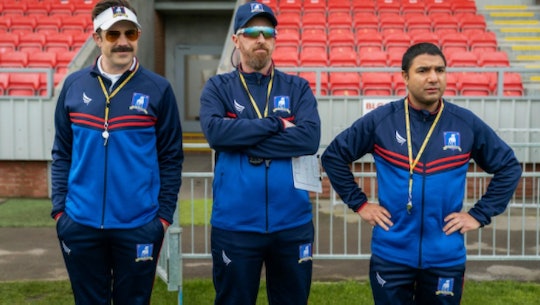 Hey Fellas, Ted Lasso Season 3 Is Officially In The Works

And it could be the last.

Jason Sudeikis and the rest of the Ted Lasso crew have really pulled off a miracle with their hit series. The show hits this great sweet spot of being endearing and funny and weirdly sentimental without being snarky or condescending. No wonder Ted Lasso will be back for a third season. Apparently we all wanted to watch a show about a good-natured football coach moving to England to become a soccer (British football) coach and figure out life across the pond. Even those of us who are not exactly sports fans can’t get enough of Ted Lasso. I think it has a lot to do with his secret shortbread cookie recipe and the stellar supporting cast, but that’s just an educated guess.

For those of you who haven’t seen either of the first two seasons of Ted Lasso, you are in for a treat. Saturday Night Live alum Sudeikis is at his most charming as college football coach Ted Lasso, who has moved to London to take over coaching AFC Richmond, a soccer team owned by Rebecca Welton (played by Hannah Waddington). Welton is going through an acrimonious split with her ex-husband, and she has an ulterior motive hiring Lasso; she wants AFC Richmond to lose badly to humiliate her ex. Lasso, who has left behind a son and a wife in the U.S., has no idea, and comes in with high spirits despite the fact that almost no one wants him there, least of all the team or the fans. Throughout the first two seasons, Lasso works on making the team better and building relationships. What will happen in Season 3? It’s too soon to tell, but we know it’s coming.

When Will Season 3 Premiere?

The third season of Ted Lasso is on schedule to drop some time in summer 2022. Production has already begun, per Collider, with many of the main cast members having just signed new contracts for the show.

In January 2022, Brendan Hunt (Coach Beard himself) shared a post on Instagram where both he and Sudeikis were boarding a small plane with the caption, “Here we go.” Warner Bros. went on to share the post, confirming that the third season is going into production. Still no idea when the season will drop on Apple TV+ beyond a possible summer 2022 date, but at least we know it’s coming.

If Emmy nominations and wins are any sort of barometer for a show’s success, Ted Lasso is really killing it in 2021. The show won three Emmys for sound mixing and single-camera picture editing, and outstanding casting, and was nominated for 17 more. The crew nabbed seven Emmys in total, one for Outstanding Lead Actor in a Comedy for Sudeikis, Outstanding Supporting Actress in a Comedy for Hannah Waddingham, and Outstanding Comedy Series to name a few.

Ted Lasso isn’t just winning Emmys, of course. In January, Sudeikis won his second Golden Globe for Best Television Actor in a Musical/Comedy Series for his portrayal of the endearing coach, and as the Screen Actors’ Guild Awards nominations were announced, the series was tagged for an ensemble cast SAG award as well as several others.

Will This Be The Last Season?

Sudeikis, who is also an executive producer of the show, has said that Season 3 could well be the last for Ted Lasso based on the story arc, “the story that's being told — that three-season arc — is one that I see, know, and understood,” Sudeikis told Entertainment Weekly in June. “I'm glad that they are willing to pay for those three seasons. As far as what happens after that, who knows? I don't know.”

Where To Watch Ted Lasso

Knowing this might be the last season for Ted Lasso, now is the time to catch up on the first two seasons. You can watch Ted Lasso on AppleTV+ if you’ve subscribed for $4.99 per month, and you can cancel at any time. And be sure to eat some shortbread while you watch. It’s what Ted would want.