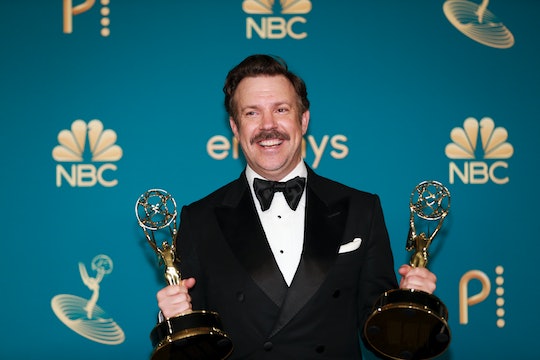 “Can we shave some time here, Jason? Dad?”

Jason Sudeikis took home not just one but two Emmy awards for his work on the massively popular Apple TV+ show Ted Lasso on Monday night, cementing himself as one of the funniest, most influential celebrities in television. But the real question here is this; is he funny to his own kids? Well, according to the man himself, it seems his 8-year-old son Otis and 5-year-old daughter Daisy think his show could use a little improvement. Especially when it comes to “structure and length,” he explained dryly when speaking to the press after his double Emmy win. Apparently they didn’t get the memo that their dad is kind of a big deal.

“Do your kids think you’re as funny as the rest of the world does?” Sudeikis was asked by a member of the press on Monday, and his response was to look at his Ted Lasso cast members with incredulity and say, “Does anyone’s kids think they’re as funny? No.” He went on to say that he didn’t know, but that Otis and Daisy, who he shares with ex Olivia Wilde, “have a lot of notes, but it’s mostly about structure. And length, believe it or not. There’s a lot of ‘can we shave some time here, Jason? Dad?’”

Everyone laughed, proving yet again that Sudeikis is funnier than his kids might think.

The proud dad of two gave his kids a shoutout during his acceptance speech on Monday, saying simply, “Otis, Daisy, I love you very much.” Proving, I suppose, that he’s not too bothered about whether or not his kids think he’s hilarious. As he pointed out, it’s rare for kids to think their parent is super funny.

Last year Sudeikis had a similar message for his two kids at the Critics’ Choice Awards as well as his ex-girlfriend Wilde, saying at the time, “I want to thank my kids, Otis and Daisy, and I want to thank their mom, Olivia, who had the initial idea for this as a TV show. She was like, 'You guys like doing that so much, you should do it as a movie or a TV show,' and she was right!”

Ted Lasso is set to return for a third (and potentially last) season some time in the near future as production is currently underway. Maybe this is the season where Otis and Daisy think their dad is super funny.