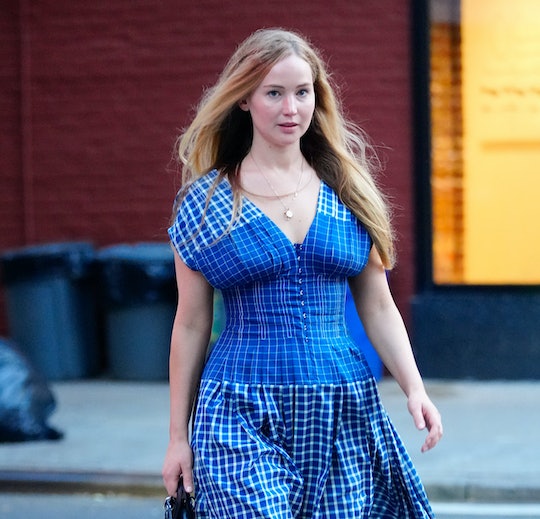 “He’s gonna drive one day. He’s gonna be a stupid teenager and be behind the wheel of a car.”

Jennifer Lawrence has been a mom for just over six months but she’s already worrying like a well-seasoned mom with years of experience. About her husband of three years, art dealer Cooke Maroney, and about their baby boy who is just six months old. But Lawrence is looking down the road and imagining him as a person who is just walking around getting into mischief. Welcome to motherhood.

Lawrence has been justifiably reticent about discussing her personal life since becoming a mom in February, so much so that she didn’t confirm her baby boy’s name, Cy, inspired by one of her husband’s favorite artists Cy Twombly, until a recent profile for Vogue. Once that floodgate was opened, however, Lawrence got emotional about her journey as a new mom. Or the journey she sees her son having once he’s older, I should say. And she’s already pretty terrified.

“My heart has stretched to a capacity that I didn’t know about. I include my husband in that. And then they’re both just, like, out there — walking around, crossing streets,” the American Hustle actress told Vogue. “He’s gonna drive one day. He’s gonna be a stupid teenager and be behind the wheel of a car. And I’m just gonna be like, Good night! You know? Like, who sleeps?”

Her clear and all-encompassing love for her son may have come as a surprise to Lawrence, who apparently figured she might love her baby as much as she loved her cat, at best. “I remember walking with one of my best friends at, like, nine months, and being like, ‘Everyone keeps saying that I will love my baby more than my cat. But that’s not true. Maybe I’ll love him as much as my cat?’” she shared with Vogue.

While Lawrence didn’t specify which friend she was speaking to about her pregnancy, it could well be fellow mom Amy Schumer. Who might find it all so ironic, especially since Lawrence once hassled her about going to bed early when she became a mom to 4-year-old son Gene. “Are you asleep bc of the baby??” Lawrence texted the new mom in an exchange Schumer shared on Instagram at the time. “Are you asleep before 11? Is this bc of the baby? Don't make me resent the baby. Wow. Ur really asleep before 11. I'll be d*mned.”

Now here she is, a mom herself. Worrying about her son someday becoming a teenager when he can’t even walk yet. The circle of life.