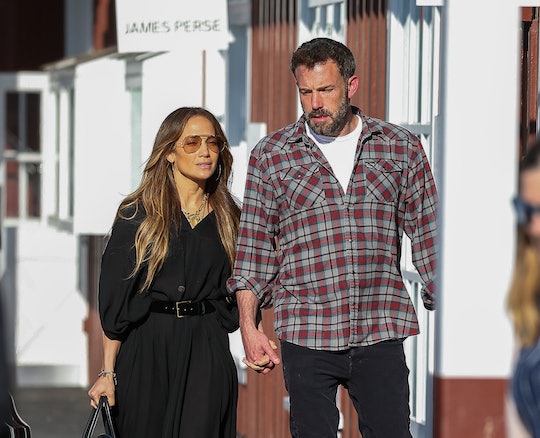 They kept it in the family.

When Jennifer Lopez and Ben Affleck got married in a private ceremony in Las Vegas over the weekend, they kept things very personal. They quietly went over to the Little White Wedding Chapel, stood in line with other couples, and completely avoided any fanfare. They clearly wanted it to be about the two of them. Well, the seven of them actually. Because the couple brought their kids with them, and made sure to keep them involved in the ceremony by making them their wedding photographers. Now they can put that on their resume. Impressive.

In her On The JLo newsletter, Lopez shared that she and Affleck got married on Saturday night, 20 years after they were first engaged. “We did it. Love is beautiful. Love is kind. And it turns out love is patient. Twenty years patient,” she wrote. And this time around, love includes the couple’s five children. The Hustlers star brought her 14-year-old twins Max and Esme, who she shares with ex-husband Marc Anthony, along to witness the event while Affleck brought his three kids, Violet, 16, Seraphina, 13, and Samuel, 10, who he shares with ex-wife Jennifer Garner, along as well.

And they did more than just watch their parents get married. They were the official photographers of the event.

While the rules at the wedding chapel in Las Vegas usually state that witnesses must be 18 years old, Ryan Wolfe, the minister who married the couple, told People that both of the twins and one of Affleck’s children stood as witnesses. And photographers.

“Their kids took pictures during the wedding, and then I set up Ben's phone there in the chapel and they videoed the ceremony,” Wolfe says. “There was no professional photographer.” He added that the young photographers seemed “thrilled” to see their parents get married. “At the end of the ceremony, they were almost giddy excited, jumping around. You could tell [the two kids] also were close, had a good relationship, really liked each other. They were very excited and you could tell they really were happy.”

What a wonderful way to make sure the kids felt included in the ceremony. Also, if any of them are thinking of becoming professional photographers some day... that’s a pretty great place to start.