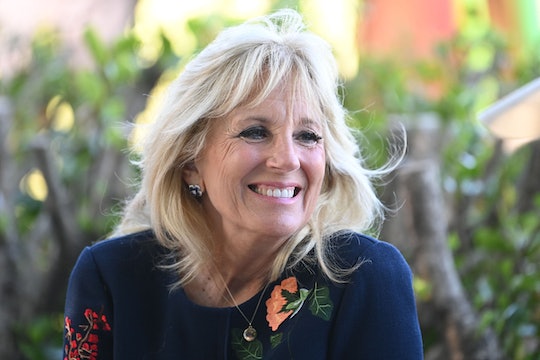 FLOTUS is a fan.

ABC’s Abbott Elementary has a serious fan in Dr. Jill Biden. The First Lady took time on her way home to Washington, D.C. on Wednesday to catch the premiere episode of Season 2. And it should really come as no surprise that a lifelong teacher like Dr. Jill Biden would be a fan of the Emmy-winning series that has been so widely praised for accurately depicting the world of an elementary school. Not surprising, but oddly satisfying to see these two worlds collide.

Biden was in New York City taking part in the United Nations General Assembly on Wednesday, and on her way home she sat down to catch the first episode of Season 2 of Abbott Elementary, the show created by Quinta Brunson about life at a Philadelphia elementary school inspired by her own schoolteacher mom. And it looks like Biden, a lifelong educator herself, was a fan.

“Sometimes it’s the little things that bring such joy — like catching @abbottelemabc live as we take off for DC after a busy day at the @UnitedNations General Assembly,” she wrote on Instagram. “@quintab, thank you for the late night laughs ahead of teaching tomorrow!”

High praise indeed from the Biden, who made history as the first woman to keep her job as First Lady and has consistently made education a top priority since taking over the office. So much so that her first official White House event was to honor educators who were sorely challenged throughout the Covid-19 pandemic.

As the daughter of an educator herself, Brunson was hopefully flattered to have received a rare shout-out from the First Lady. The Emmy-winning writer took to her Instagram Story to repost Biden’s message amid her celebratory posts about the show’s return, and honestly that felt like a real Abbott Elementary moment. Taking a beat to acknowledge praise before simply getting back to the job at hand. It’s a work ethic she learned early on from her mom. “I was in her class and I went to the same school where she taught for like six years, including kindergarten,” Brunson told Kelly Clarkson about watching her mom as a teacher. “So I rode to school with her, rode home with her, watched her work more at home. It's just getting such a different view. And I really credit my mom's experience for helping me to create the show.”

Lucky guess, but it seems like Quinta Brunson and Dr. Jill Biden would have a lot to talk about if ever they should meet. And hopefully Brunson’s mom gets to be part of the conversation too.

You can catch Season 2 of Abbott Elementary on ABC on Wednesdays at 9 EST or stream it on Hulu.