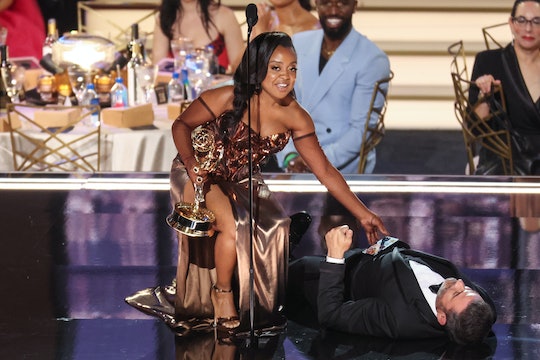 And she got the last laugh too.

Quinta Brunson, the Emmy-winning creator of the smash hit TV comedy Abbott Elementary proves that she is just as kind and generous as the teacher she plays on her popular show. The actress stopped by Jimmy Kimmel’s talk show and collected the apology she definitely deserved for, as he described it, his “dumb comedy bit” at the 2022 Emmys. And in an act of justified revenge, she also interrupted the talk show host’s monologue so she could finish up her interrupted award show speech.

At the top of the show, Brunson walked out on the Jimmy Kimmel Live! stage to make her presence known. “I just I have a little favor to ask,” she said to Kimmel. “So you know how when you win an Emmy you only have 45 seconds to do an acceptance speech, which is like not that much time. And then ... you get less time because someone does a dumb comedy bit that goes on a bit too long?”

“I have heard of that happening in previous years,” Kimmel replied.

The whole mea culpa bit was shared on the official Instagram account for the Jimmy Kimmel Live! show. “Emmy winner @QuintaB takes some time out of Jimmy’s monologue to finish her acceptance speech…” the late night show captioned the post.

Brunson was a vision in sparkly pink as she went on to thank all the people that she left out the first time around, including fans of the show, her writers, and “the internet for raising me.”

When Brunson and Kimmel sat down for their official interview couch chat, Brunson finally received a very warranted apology.

“That was a dumb comedy bit that we thought it would be funny,” said Kimmel. “Then people got upset, they said I stole your moment. And maybe I did. I'm very sorry if I did do that. I did do that, actually. ... The last thing I would ever want to do is upset you, because I think so much of you. I think you know that. I hope you know that.”

Brunson was exceptionally gracious, accepted the apology, and shared that she actually had a great Emmys night. But she couldn’t resist delivering a delicious dig at Kimmel.

“And I went one time and won,” she said with a smile.

Kimmel offered then offered one more attempt at saying he was sorry: “I was dumb, and I've got news: It's gonna happen again.”

In addition to the public backlash, Kimmel’s decision to publicly express his regret was perhaps also inspired by another member of the Abbot Elementary cast (who did have the opportunity to deliver an unbelievable Emmy acceptance via inspirational song). Sheryl Lee Ralph was quite displeased with Kimmel’s spotlight-stealing antics, and she was definitely not about to condone the disrespect of her costar.

“I was absolutely confused. I didn’t know what was going on,” she told a virtual panel of the Television Critics Association's summer press tour. “I was like, ‘I wish that man would just get up off of the ground.’ And then I realized it was Jimmy Kimmel, and I was like, ‘Ooh, the disrespect, Jimmy!’ But that’s just me.”

“I told him, too! To his face!” the bedazzled Emmy-winner continued. “And he understood.”

Looks like Kimmel was definitely sent to the back of the class by everyone’s favorite no-nonsense TV educator, Barbara Howard.

More Like This
Quinta Brunson Had To Give Her Emmy Speech With Jimmy Kimmel At Her Feet
Quinta Brunson Got A Sweet Card From A Kid On Abbott Elementary After Her Emmy Win
Exclusive: Watch Hayden Panettiere Talk About Addiction Treatment 4 Months Postpartum
People Are Convinced Kylie Jenner Gave Her Baby Boy A Weather-Themed Name