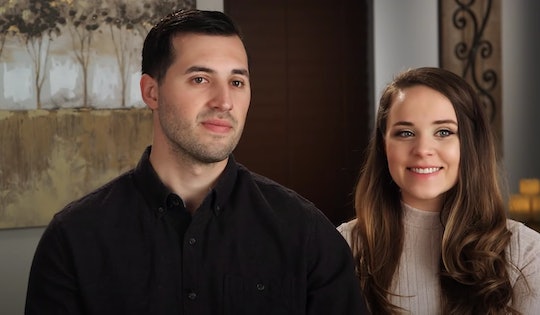 The Counting On star and her husband Jeremy Vuolo are now parents to two adorable daughters.

With a sweet photo with her newborn daughter, Jinger Duggar announced she gave birth to her second child. The Counting On star and her husband Jeremy Vuolo first revealed the news in a statement to TLC. "We've got good news!," the new parents shared with the network. "Our baby girl, Evangeline Jo, arrived quickly and safely on Sunday night."

"Jinger is recovering well, enjoying finally being able to hold her little angel," Jeremy added in the statement. Jinger gave birth to her daughter, Evangeline Jo, on Nov. 22 at 11:26 p.m., according to TLC. The little girl weighs 7 lbs. and is measuring at 20 inches. This is the second child and daughter for the couple, who welcomed their oldest daughter, Felicity Nicole, on July 19, 2018.

Evangeline's name has a special meaning for the couple. Evangeline has Greek origins, according to Nameberry, and means "bearer of good news." Jinger explained to TLC that Evangeline's middle name, Jo, is after Jeremy's middle name, Joseph. This falls in line with how they named Felicity; their oldest daughter's name means "intense happiness or supreme joy" and her middle name, Nicole, is the same as Jinger's.

It's safe to say Jinger and Jeremy are so in love with their newest addition. "We are so thankful to God for this precious little angel," the proud mom wrote on Instagram alongside a photo of them in the hospital announcing her daughter's birth on Wednesday.

Meanwhile, Jeremy opted for a more humorous approach while sharing his first photo of their new daughter, sharing an adorable, close up photo of Evangeline giving some serious "side eye." "Welcome to 2020, Evangeline Jo," he wrote in the caption of the photo. "Understandably, she's skeptical."

But Felicity is not skeptical about her baby sister, as Jeremy told TLC. "She is in love with her little sister but has no idea how much sharing is in her future," he said. Prior to welcoming Evangeline, the couple had been open about how they were preparing their 2-year-old for their new arrival. "She walks around saying 'big sister,'" Jinger told Us Weekly in August. "She always asks for her 'big sister' shirt that she has. She will come up and touch my belly and say 'baby.'"

Now that their little one is finally here, you can likely "count on" the couple to share more photos of their adorable daughters. The holidays are here, after all.