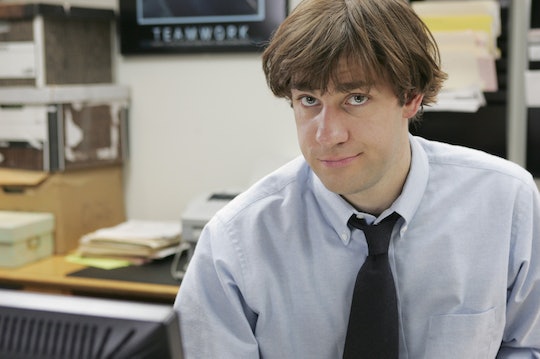 John Krasinski’s Daughters Have Officially Seen Him In The Office

Maybe they got the inside scoop on Jim’s teapot note!

Emily Blunt and John Krasinski’s two daughters might not want to tune into every single movie and television show their parents have ever done, but there’s one series they can apparently get behind. The universally-beloved The Office. Blunt recently told E! that her 8-year-old daughter Hazel and 6-year-old daughter Violet have watched episodes of The Office, and now we’re wondering how they felt about the whole Jim and Pam romance storyline.

Blunt admitted to E! that Hazel and Violet have watched a few of her movies, Mary Poppins Returns and Jungle Cruise specifically, and they’ve also “seen some episodes of The Office, which they liked a lot.” She didn’t say which episodes her daughters watched, although I certainly hope she started them off in Season 1 or even just went with the holiday episodes because those are always fun.

At any rate, the famous couple’s daughters are not terribly interested in seeing their parents on big screens or small screens. “They don't really want to watch us on screen,” Blunt said. “They've got that ownership of us as parents. It's not they're not like running to see me in a movie, which keeps you humble.”

Assuming their kids haven’t seen their parents act together in The Quiet Place. That might not be a good one to watch for a few years.

Prior to seeing their dad in The Office, the only movie Hazel and Violet had seen their dad in was the animated movie DC League of Super Pets. Which was actually the first time he was able to convince them he was even an actor. “I think up until now they didn’t actually believe I was in the business,” the proud dad told Jimmy Fallon earlier this year. “Because they’ve never seen anything I’ve done.” Now they know.

While Blunt’s two daughters might not love to watch their parents on screen, but they’re certainly benefitting from their lives as children of performers. For instance, the entire family recently learned to ride horseback when she was filming her new Amazon Prime movie The English. “They learned how to do the horse and buggy,” she told People.

Hazel and Violet really have it figured out. Enjoy all the perks of your parents being famous actors without having to deal with any of the other stuff. Well done.

More Like This
Quinta Brunson Credits Her Parents For Her Confidence, Now & As A Kid
Here's How The Cast Of 'Wednesday' On Netflix Compares To The '90s Movies
'Wednesday' Creators Say They're "Talking Amongst Ourselves About Season 2
'Workin' Moms' Has An Official Release Date For Its Final Season