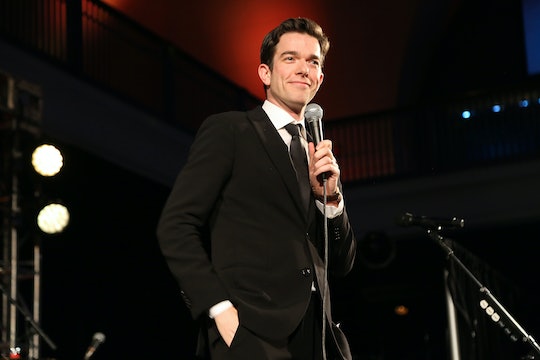 John Mulaney might have a little comedy partner in the coming years. His son Malcolm with girlfriend Olivia Munn seems to have picked up on his dad’s comedic timing, because the father and son duo had basically the same faces in a new photo Munn shared on Instagram.

Munn took to Instagram on Wednesday to share a series of photos of Mulaney and their 4-month-old son Malcolm, who has become the true star of his mom’s social media feed. The first photo sees Mulaney sitting under a tree outside with Malcolm on his lap, both of them staring at a stuffed giraffe Munn is holding in front of them. Both father and son have the same expression on their faces as they look at this giraffe.

“A giraffe wearing a shirt was really confusing for these two,” Munn captioned her post.

Mulaney begged to differ, commenting on Munn’s post, “We weren’t confused. We were just surprised.”

Whatever those expressions might have been, confused or surprised or even befuddled, the two of them both looked surprisingly similar. Twin-like, one might even say.

Munn’s second photo in the series was a close-up of Malcolm’s face, and I have to agree with his mom. He looks confused. But the very last photo is without a doubt the sweetest one yet. A close-up of Malcolm resting his hand on his dad’s hand while Mulaney holds his son’s tiny foot in his other hand. A casual little love story between a father and son right there.

Mulaney has really seemed to embrace his new life as a dad ever since Malcolm’s arrival last December. In January, he shared photos of Malcolm being worn on his chest with the caption, “Happy Birthday to the tiny man who has been stuck to me for two months. Whoever you are sir, you sure are a fun companion.” Malcolm certainly does seem like a fun companion for both his parents, even though he did vomit in his mom’s fresh blowout earlier this month.

I guess you have to take the bad with the good. For every cute twinning moment with his dad, there’s a hair vomit story. Such is parenting.