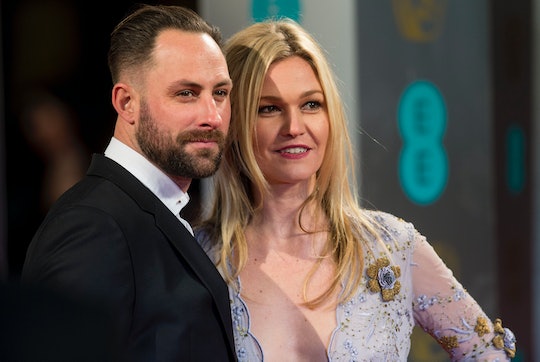 Let’s just say her 4-year-old had some feelings...

Julia Stiles is officially a mom of two! On Wednesday, the actress and her husband Preston J. Cook announced that they had welcomed their second baby, and while they are excited about the new addition to the family, their 4-year-old son Strummer might have mixed feelings.

Stiles and Cook, who married in 2017 after meeting on the set of one of her movies, shared the announcement last November via a representative that they were expecting. Just two months later, they welcomed baby boy Arlo to the family. The 10 Things I Hate About You star shared an Instagram post featuring a sweet photo of Arlo’s feet and the message, “Welcome to the world, Baby Arlo! The newest addition to our family, reminding me how infinite love can be.”

Little Arlo joins 4-year-old brother Strummer, who the couple welcomed in November 2017. Stiles told Romper in December that she was “excited” about becoming a mom of two, though she was a little nervous. “Other than that, I'm terrified: my kids will outnumber me.”

Julia Stiles is a mom of two.

Strummer, however, didn’t necessarily appear to be feeling all of that infinite love and excitement coming from his mom. Stiles added a second photo to her Instagram post, noting in the caption, “Scroll Forward to see how my 4 year old is taking it…”

It seems Strummer decided to celebrate the birth of his little brother by drawing all over the toilet in red marker, making a frowny face on the toilet tank, and then adding an artful brown beard to the entire look. At least he’s not bottling up his feelings.

Of course, it’s pretty typical for an older sibling to get a little disgruntled by the arrival of a new baby. Some older siblings go through a little regression and start acting out, it just appears as though Strummer decided to get ahead of it all and start sharing his feelings now.

Stiles probably isn’t terribly surprised as Strummer has shared his art work with her before and she has proudly displayed it on social media. Like most kids, he will get used to his baby brother. And Stiles has a secret weapon to keep him interested in Arlo. “The thing that sold him I think was the kid board,” she explained to Romper. “It’s this platform that they can stand on that goes behind a stroller that's almost like a skateboard.”

Anything to keep them all happy together.