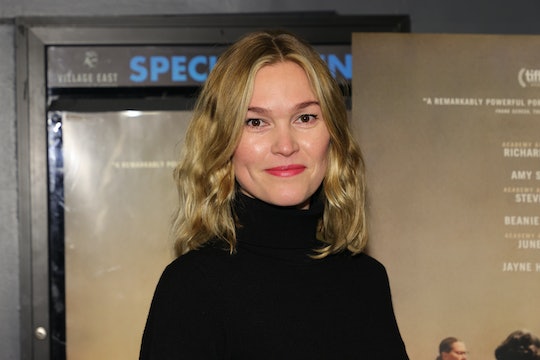 The Dragons: The Nine Realms star is expecting her second child early next year.

After she walked the red carpet with a baby bump on full display back in November, actress Julia Stiles confirmed that she was pregnant with her second child. And it turns out that her feelings on her growing family are similar to those of millions of other moms before her: “I'm excited,” she tells Romper. “Other than that, I'm terrified: my kids will outnumber me.”

Fortunately, she isn’t exactly giving up a numbers advantage overall. She’ll face down the adorable horde with her husband, actor and cameraman Preston Cook, and has even made a kind of alliance with 4-year-old Strummer, the big brother to be. He’s excited about having a new sibling — “as much as he can understand,” according to Stiles — but what he’s really excited about is the promise of a new mode of transportation.

“The thing that sold him I think was the kid board,” she explains. “It’s this platform that they can stand on that goes behind a stroller that's almost like a skateboard.”

He’s also excited about finally getting to see his mom in one of her projects. Stiles provided the voice for scientist Olivia Kullerson in the latest How to Train Your Dragon franchise series Dragons: The Nine Realms, which premiered on Hulu and Peacock on Dec. 23.

“I'm excited I have something that I can watch with my kids,” she says. “For the longest time I think my son only thought that what I do for work is getting my hair and makeup done because that's when he can come and hang out with me. And I'm like, ‘no, I actually do work.’”

The series takes place 1,300 years after the events of the last Dragon movie, when a mysterious, miles deep rift simply appears on the surface of the Earth, prompting scientists (like Stiles’ Kullerson) and their children to head to an on-site research facility dubbed “Project Icarus.” When Stiles showed Strummer immediately got into the show... sort of literally.

“I showed him this scene [in which my character is] in a helicopter,” she explains. “And I was like ‘that's mommy's voice!’ And he [points to the character’s son, Tom, and] goes, ‘And that's me!’”

Stiles has worked continuously since 1993, and yet The Nine Realms is her first foray into voiceover work. The experience was overwhelmingly positive — her enthusiasm in talking about it is palpable even over the phone — and allowed her to explore the technical side of acting in a way that she loves to “geek out” about.

“It's like the closest I'll ever get to being a singer or a musician,” she says, “because you have to put everything into your voice — a higher or lower pitch, a different inflection at the end of the sentence, that kind of thing.”

Whether we will see future voiceover roles in Stiles’ future, there’s a lot to do before then — Stiles has completed filming on The Orphan: First Kill (a prequel to the 2009 horror thriller The Orphan) and The Lake, an Amazon Original Series that will premiere next year. She’s also in preproduction on Chosen Family, a drama written by Heather Graham, and will direct her first feature film Wish You Were Here, based on the romance novel by Renée Carlino. (“I’m a sucker for romance.”)

Oh yeah, and also the small matter of having a baby. But she can handle it all, mainly because she’s a woman who knows her limits and when to say no.

“After watching [The Nine Realms], my son was really intrigued by the dragons. He thought they were cute,” she says. “And then he wanted to get a pet and I was like, ‘Well, we can't get a pet dragon, sorry.’”