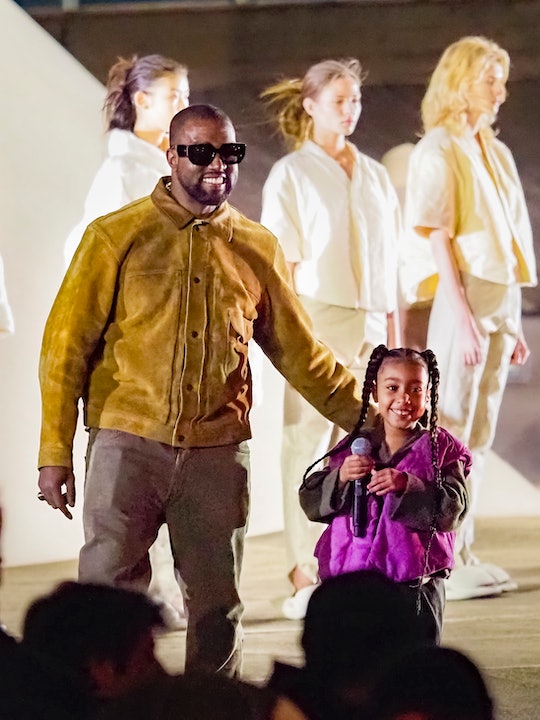 Kanye West Wore Gold Necklaces With His Kids’ Names On Them

Kanye West is returning to music, social media, and is taking his four children with him for the ride. Earlier this week, the rapper mogul and producer returned to Instagram and shared a gallery of gold necklaces that featured his children's’ names.

The College Dropout rapper, who shares his two daughters — North, 8, and Chicago, 3 — and two sons — Saint, 5, and Psalm, 2 — with his ex-wife Kim Kardashian, didn’t caption the photos on Instagram, but what is seen does not need to be explained by his fans. In five of the photos he posts, you can see the names of all four of his children written in gold old English lettering.

“Welcome back Mr. West,” one fan commented. Another wrote, “Yeezy season is approaching.”

Since West, 44, and Kardashian, 40, filed for divorce in February, their focus seems to be on the wellbeing of their children. A source told People that the two are spending time together with their kids and are actively co-parenting and taking individual vacations with them.

In addition to showing off his proud dad jewelry on his Instagram, West also posted the new Beats ad featuring track star Sha’Carri Richardson. The ad also includes a snippet of his new song, “No Child Left Behind” and an official announcement of his new album that drops on July 24 titled DONDA, which is named after his mother, who passed away in 2007.

West, who has also recently become more spiritual, has said that spending time with his kids makes him closer to God. “At the beginning, middle and the end of the day, I'm a dad,” he told Nick Cannon in a September 2020 interview. “I feel closer to God when I’m on my knees talking to my children. The lower we get, the closer we get to God. We are earth-bound creatures. We’re gravity-bound.”