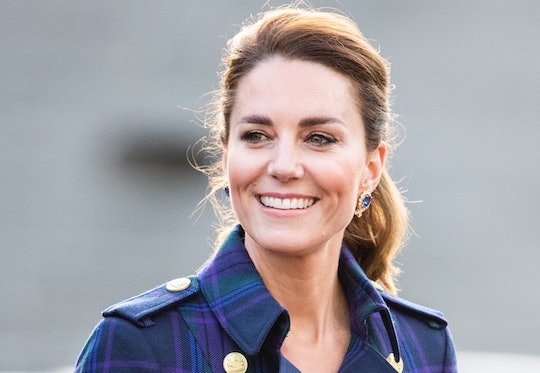 She breaks out the cake mix, just like the rest of us!

Let’s hope the Duchess of Cambridge got some extra sleep this past week. If she’s sticking with her usual birthday cake tradition, that is. As Kate Middleton and Prince William’s oldest son’s birthday approaches, it’s very possible that the mom of three will be staying up way past her bedtime, all to make sure Prince George has a homemade treat to celebrate his big day. And if that wasn’t relatable enough... apparently she uses a cake mix.

Prince George turns 8 years old on July 22, and, naturally, he will be properly feted on his big day. As the future King of England, he will receive best wishes from royal fans around the country and around the world. He will probably also have an official portrait shared by his parents as has happened every year since he turned one in 2015. But honestly, what does an 8-year-old boy care about for his birthday? Presents and cake, of course!

His mom understands this, so much so that Middleton told Mary Berry in 2019’s A Berry Royal Christmas that she is the one to bake cakes for all of her kids’ birthdays, Prince George as well as his 6-year-old sister Princess Charlotte and 3-year-old brother Prince Louis.

“I love making the cake,” Middleton told the famous baker at the time. “It’s become a bit of a tradition that I stay up ’til midnight with ridiculous amounts of cake mix and icing and I make far too much. But I love it.”

Her kids presumably love it too — and are learning from it. When it was their turn to celebrate their mother on Mother’s Day this year, which falls in March in the United Kingdom, the three children baked their mother a special cake and decorated it with sprinkles and hearts made of pipe cleaners. No word on whether or not they stayed up until midnight working on their cake or used a mix, but it’s nice to think they did.

Prince George’s family birthday celebrations will be private, of course. The family tends to celebrate at their country home of Anmer Hall with some friends and a small party. And a cake, baked for him by a duchess who also happens to be his mom. Cake mix and all.