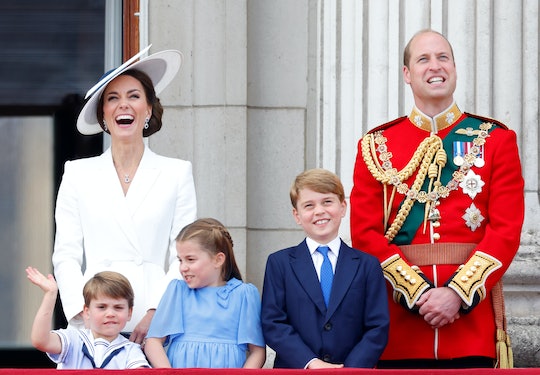 Kate Middleton Shares Her Kids' Sweet, Yet Honest Reaction To Seeing Old Photos Of Her

“You look so young mummy!”

The Princess of Wales is clearly a mom who is comfortable encouraging her three kids to speak their minds. Even if sometimes it (rather sweetly) backfires on her. Like when her kids see older pictures of her from more than a decade ago and can’t help pointing out she looks younger. I mean, of course it’s true, this is what the years do to us all. But still. Ouch.

Kate Middleton and her husband Prince William recently visited Wales as the newly anointed Prince and Princess of Wales, and while there a royal fan handed her an old photo from when the couple were first engaged more than 11 years ago. “Oh my goodness, is that from our engagement?,” Middleton reportedly said when she saw the photo. “We always laugh about it because although we've been married for 11 years, we've been together for double that.”

Throughout their relationship, the future King and Queen Consort have welcomed 9-year-old son Prince George, 7-year-old daughter Princess Charlotte, and 4-year-old son Prince Louis, and they have their own reactions to seeing older photos of their mom. As Middleton told the royal fan, “It's extraordinary and the children look back at our old photos and say 'Mummy, you look so young!’”

To be fair to the royal kids, everyone looks different after 11 years. I mean, they weren’t even alive back then so that time frame must feel pretty significant. It’s not like they were telling her she looked old or anything, right?

Besides, Prince George, Princess Charlotte, and Prince Louis all have loads of stuff on their own minds right now. They moved to Adelaide Cottage in the fall and started at a new school together, Lambrook School, where they are making new friends. Prince George in particular seems to have lots on his mind these days. Middleton told a group of schoolchildren in Wales that her oldest son has been trying to master a new skill for school. “I've been teaching George because he has got to wear a tie now for school, so I'm having to teach him how to do it,” she said, per Hello!.

Time marches forward for us all. Wait until Prince George and his siblings see old photos of themselves in 11 years. That will really be something.