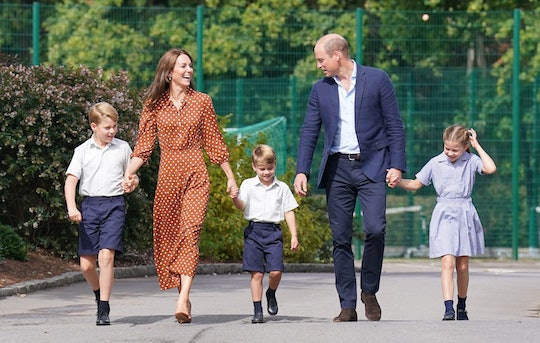 Kate Middleton can’t get all the credit.

Not every parent out there loves doing the school run in the morning and would perhaps even gladly pass the chore along if they could. The Prince and Princess of Wales have that option, of course, with a full coterie of support staff on hand to take their three children to school in the morning if that’s what they prefer. But no, they like to do it themselves.

In the aftermath of Queen Elizabeth’s funeral, Prince William and Kate Middleton spoke to volunteers and staff members who had worked so hard to make sure the state funeral went off without a hitch. They spoke about watching the preparations with their three children, 9-year-old Prince George, 7-year-old Princess Charlotte, and 4-year-old Prince Louis, as they were making their way to bring them to school in the morning.

In a video shared on Twitter from an iTV broadcast, one couple who met Prince William and Princess Catherine noted that they thought it was “strange seeing the future Queen doing the school run,” at which point Prince William chimed in to say, “I do it as well!” He can’t let his wife have all that school run credit now, can he?

The day that Queen Elizabeth passed away at Balmoral Castle in Scotland, the couple were, in fact, dropping their three kids off at their new school in Windsor, Lambrook School. It was the first time the three children all attended the same school, which was a big deal, and of course both parents were there to make the day special. During Queen Elizabeth’s funeral preparations and official mourning period, Middleton and Prince William chose to keep their kids in school to provide a bit of normalcy for them. They couldn’t help being curious about all the security drones flying around the place during the school run, of course, and both Prince George and Princess Charlotte accompanied their parents to Queen Elizabeth’s funeral.

On normal school run mornings, Kate Middleton and Prince William are really just regular parents trying to get their kids to school on time. Middleton has been known to show up a touch late with her hair in a ponytail, and when their children went to different schools they split the drop-offs by heading in different directions. This new system must feel like a walk in the park for them. A walk they both take, just in case anyone was going to insinuate Prince William wasn’t doing his fair share.