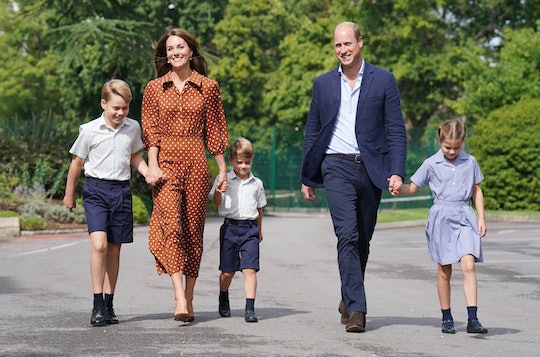 George, Charlotte, and Louis went for a “preview afternoon” at their new school.

For the first time ever, all three of the Cambridge kids are heading off to their first day of school together. It’s a big deal, especially for 4-year-old Prince Louis, the baby of the family, who is heading off to big kid school alongside his 9-year-old brother and 7-year-old sister for the first time. And judging from the big grins on the faces of Kate Middleton and Prince William in photos of the family while attending a preview day, it was an exciting morning for them too.

The Duke and Duchess of Cambridge accompanied their three children to their new school near Ascot in Berkshire, Lambrook School, prior to their official start date on Thursday for a “settling in afternoon,” according to a press release from Kensington Palace, which is “an annual event held to welcome new starters and their families to Lambrook, and takes place the day before the start of the new school term."

Prince George, Princess Charlotte, and Prince Louis all wore their new school uniforms for the visit: navy shorts and a white short-sleeved shirt for each of the boys and a light blue dress for Princess Charlotte.

Both of their parents were on hand to bring them to Lambrook, a new school for each of them as Prince George and Princess Charlotte previously attended Thomas’s Battersea School in London, while Prince Louis attended Willcocks Nursery School. They switched to Lambrook this year after the family moved to Adelaide Cottage in Windsor to be closer to Queen Elizabeth.

Prince George looked pretty excited to be heading off to his new school. And also tall.

The three royal kids were greeted by Lambrook headmaster Jonathan Perry, who shook hands with all three children as they arrived for their preview day. Princess Charlotte, ever a fan of a handshake, looked particularly excited to shake hands with her new headmaster.

Princess Charlotte also seemed to be enjoying a little more bonding time with her dad on her way to school.

Perry had previously shared his excitement at the royals attending Lambrook in a statement, saying in August per The Daily Mail, “We are delighted that Prince George, Princess Charlotte and Prince Louis will be joining us this coming September, and very much look forward to welcoming the family, as well as all of our new pupils, to our school community.”

Prince Louis was truly on his best behavior, looking every inch the big boy. More’s the pity.

If ever you thought of Kate Middleton and Prince William as unrelatable, check out their excited smiles as they get their kids ready to go off to school after a long summer. Look familiar?

Lambrook School certainly sounds like it will be a special place for the royal kids. Set on 52 acres, there’s an orchard, a pool, farm animals, and every extracurricular activity you can imagine available for them. An exciting time of change for the whole family. Mimosas all around.