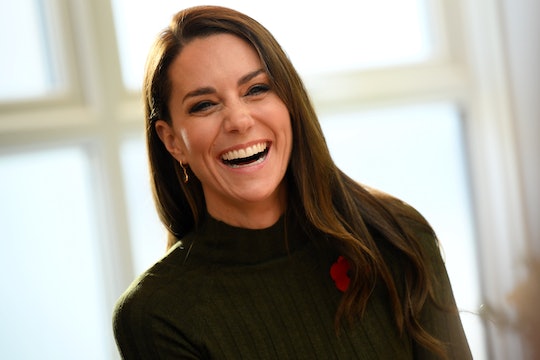 When addressing Kate Middleton, what does one call her on first mention? Your Royal Highness? The Princess of Wales? The Duchess of Cambridge? Apparently none of the above. In a very sweet moment captured on video, Middleton introduced herself to a little boy simply as “Catherine.” He was adorably unfazed by the future Queen Consort of England crouched in front of him and introducing herself. He just said “Okay” and moved on with their chat.

Middleton was out on a royal visit to support one of her favorite causes on Wednesday, the Maternal Mental Health Alliance. The mom of three has often spoken of her own struggles in the early days of becoming a mother, and supporting mothers has become a real touchstone for her charitable efforts. Of course, it helps that she got to hang out with moms and kids for the morning at Colham Manor Children’s Centre. One little boy was especially enjoying his time with Middleton.

A 3-year-old boy named Akeem marched right up to Middleton so they could have a visit. She crouched down in front of Akeem to talk, and he almost immediately asked her, “What’s your name?” When she said, “My name is Catherine,” Akeem replied, “Okay” and then moved on to check out the red poppy pin on her coat.

Middleton asked him if he had a poppy and then offered hers to him. He said he wanted it, and she explained the significance of the poppy, telling Akeem “it’s for remembering all the soldiers who died in the war.” Not that Akeem was listening to her history lesson. He really just wanted that flower.

The Princess of Wales always seems most at ease when engaging with children. Most recently, she met with a little girl dressed as a princess during a royal outing, and tends to focus on chatting with children whenever she is out in the public in her capacity as a senior working royal. Sometimes even when she’s not working. Like back in August when Middleton had a long chat with a boy on a train who was waiting outside the bathroom for his dad. She kept him company until his dad was finished and gave him the surprise of his life.

As mom to 9-year-old Prince George, 7-year-old Princess Charlotte, and 4-year-old Prince Louis, Middleton clearly speaks fluent kid. And is always happy to make time for a little one... even if it means giving up her own poppy in the process.