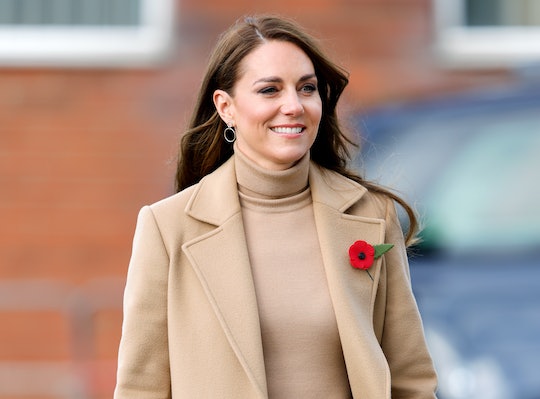 If only the Princess of Wales wore a sparkly tiara for the occasion!

During a recent royal outing in Scarborough, Kate Middleton met a little girl dressed as a princess. As the Princess of Wales, it’s rather sweet to see her reaction to a little girl dressed as the fantastical version of the person she actually is herself. Because, of course, little ones imagine a world where princesses wear tiaras and shimmering dresses instead of tasteful monochromatic fall essentials in camel.

Middleton joined her husband Prince William at a royal function along the Yorkshire coast in support of a charity supporting young people’s mental health. While there they were greeted by a little girl named Callie Rose, dressed in a blue princess dress and carrying a bouquet of flowers to give to a real princess, Kate Middleton. Both Middleton and Prince William were quick to crouch down and chat with Callie.

“Look at you in that sparkly dress!” Prince William said to her. Meanwhile, Middleton spent time with the sweet girl, letting her show her all of the different flowers in the bouquet. Video of the lovely exchange was shared by Greatest Hits Radio Yorkshire Coast.

That wasn’t enough for little Callie, however. Later on she made both the Prince and Princess of Wales laugh when she interrupted his speech by casually just walking past him like it was no big deal. Because this real-life princess is always laidback when it comes to meeting her tiny counterparts. And answering all of their princess-related questions.

Back in 2021, Middleton chatted on the phone with 5-year-old Mila, a young girl battling Leukemia who had been unable to see her father during the Covid-19 lockdown due to being immunocompromised, and promised to wear a pink dress when they met someday. Mila was hopeful she was going to be wearing a princess costume, and Middleton went on to keep her promise by meeting her wearing a pink dress. No tiara, but at least she wore a pink dress.

As a mom of three, Middleton clearly understands kids’ fascination with princesses. And princes, it seems, as she was once asked by a little boy if she was a prince during a royal outing. No big surprise, Middleton laughed about it. Because that’s the thing about this real life princess. She doesn’t take herself too seriously.