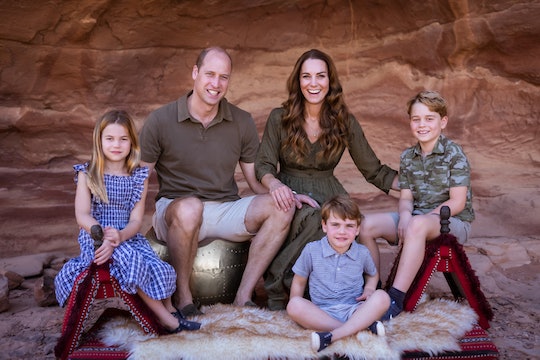 The Duke and Duchess of Cambridge also showed off a little PDA!

It’s finally happened. After a year of waiting and wondering what look they would go for, the Duke and Duchess of Cambridge finally came through. On Friday, Kate Middleton and Prince William released their 2021 family Christmas card and there’s a lot to unpack... For starters, it appears to have been taken in a cave.

Prince William and Kate Middleton stuck with their annual tradition of releasing the photo they use for their holiday Christmas card via Instagram, and this year it was a great one. Of course, they were joined by 8-year-old Prince George, 6-year-old Princess Charlotte, and 3-year-old Prince Louis for their family Christmas card, all wearing summer looks because it was presumably taken months ago. Prince William joined his two sons George and Louis in wearing shorts, while Princess Charlotte and her mother wore dresses. The family tends to share outdoorsy photos for their holiday card as they did in 2020, although the family wore sweaters and jeans for that one. This time around, it was all about summer.

“Delighted to share a new image of the family, which features on this year’s Christmas card,” the Duke and Duchess of Cambridge captioned this year’s holiday photo.

The Duke and Duchess of Cambridge shared their 2021 Christmas photo.

The photo sees Prince Louis sitting on a sheepskin rug on the ground, while his brother and sister are perched on festive-looking sawhorses. Prince William and Kate Middleton joined their children for the photo taken inside a cave, and Kensington Palace announced in a statement that the image was taken “in Jordan earlier this year” when the family visited on holiday.

Middleton and Prince William also seemed to go for a more relaxed look that is in keeping with their more casual social media presence from the past year. They had a hand on each other’s knee, and we all know how the royal family tend to avoid public displays of affection. That was before; this is now. Ever since the family shared a beautiful video of themselves running around the grounds of Anmer Hall for the couple’s 10th wedding anniversary, they’ve come across as more relaxed. So much so that they wore shorts on vacation for their Christmas card. This is a royal look I can get behind.