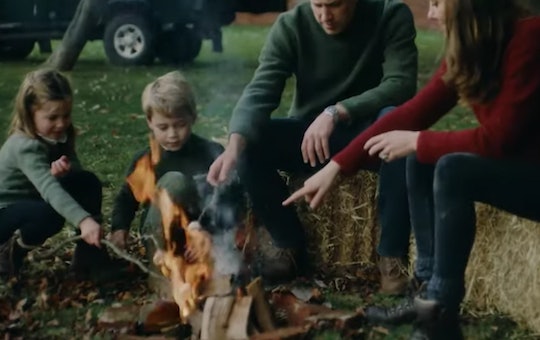 The Duke and Duchess of Cambridge celebrated their 10th anniversary on April 29. They marked the special occasion with two new romantic photos of themselves looking exceedingly loved up and happy. And just hours later, the couple shared a family video of a day spent outdoors with 7-year-old Prince George, 5-year-old Princess Charlotte, and 3-year-old Prince Lois. A video far more intimate and personal than anything they’ve ever shared, showing a glimpse at their private life as a family.

To thank the many people who sent them well wishes for their anniversary, Kate Middleton and Prince William shared the candid footage on Kensington Palace’s Instagram page. A beautifully filmed, intimate, behind-the-scenes look at their life with their adorable kids. Climbing over dunes at a beach, playing in the yard at Anmer Hall, the Cambridge country home in Norfolk County, all of them wearing varying shades of dark green and khaki and looking like just about the happiest, most relaxed family you ever did see.

“Thank you to everyone for the kind messages on our wedding anniversary,” the couple captioned the video. “We are enormously grateful for the 10 years of support we have received in our lives as a family. W&C.”

In the video, Prince Louis joined Princess Charlotte and Prince George as the family climbed over the dunes of a local beach. The entire family wore rain coats and boots, laughing and having a glorious time together. The video also showed sweet moments between Prince Louis and his mom, who carried him part of the way, Prince William chasing down Princess Charlotte in a game of tag through the trees, and even a moment of quiet contemplation for Prince George as he stood with his hands in his pockets, looking out over the beach and seeming terribly grown up all of the sudden. The 7-year-old was later seen holding hands with the duchess as the two enjoyed a quiet chat between them.

Prince William and Kate Middleton shared a beautiful video of their family.

Oh, and let’s not forget the family’s new cocker spaniel puppy, a gift from the children’s uncle James Middleton, who made a sweet cameo.

There was tree climbing in the yard. There was a campfire with marshmallows roasting on sticks. There was the future King and Queen Consort of England sitting on thrones of bales of hay as they spent quality time with their family. There was Prince William sitting with his arm around his wife. The two of them laughing together. Leaning on each other. In jeans and sweaters with their children and their dog and the wide open world all around. A perfect anniversary.