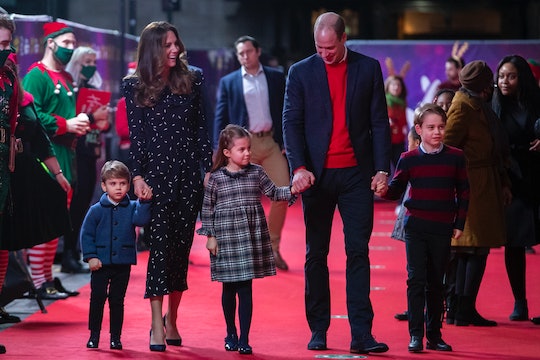 The Cambridge Family's 2020 Christmas Card May Be Their Best Yet

Prince Louis' smile is the kind of cheer the world needs right now.

It's that time of year again when the world gets a glimpse at Prince William and Kate Middleton's annual Christmas card featuring their sweet little family and, as expected, it's an absolute delight. And while the entire Cambridge family looks so happy and wonderful in the photo, we can probably all agree that a very giggly Prince Louis is the star of 2020's photo.

For this year's holiday card, Prince William, Middleton, and their three kids — 7-year-old Prince George, 5-year-old Princess Charlotte, and 2-year-old Prince Louis — posed outside and in front of a pile of firewood. In the never-before-seen photo, the Cambridges were all wearing cozy sweaters and casual pants as they smiled for the camera. But nothing could beat Prince Louis. You can practically hear him laughing in the photo, which was shared on Instagram by the Windsor Royal Family fan page.

Sending out Christmas cards with a new family photo is a longstanding tradition in the royal family. For their 2019 holiday card, the Cambridges posed outside on a motorbike and side car, with Prince Louis sporting the most adorable dungarees. While Prince William and Middleton never officially released the Christmas card photo on their Kensington Palace Instagram account, Queen Elizabeth II did include it on her desk during her Christmas broadcast.

'Tis the season for photos and sightings of the royal family, it seems. A hard-to-see photo of the Cambridge kids was spotted in the background of the queen's first virtual diplomatic audience earlier this month. Shortly after that, Middleton, Prince William, and their three kids walked the red carpet together during a visit to a special pantomime performance at the National Lottery's Pantoland at The Palladium last week.

While the family thankfully continued with this tradition, Prince William recently told students in Wales that his family's Christmas plans this year are up in the air. "It is so difficult, we are still trying to make plans," he said, according to The Daily Mail. "It's difficult to know what to do for the best."

Fortunately, in a tough year like 2020, the world didn't miss out on seeing Prince Louis' smiley little face.