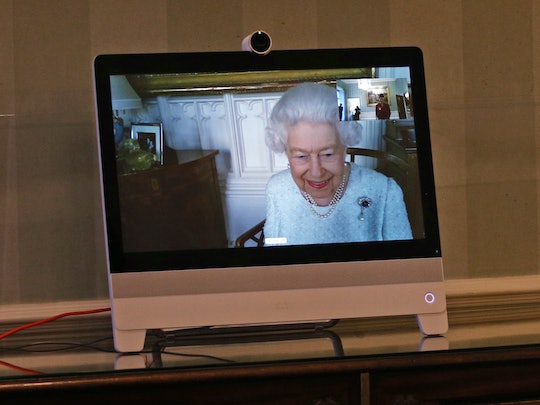 But you'll have to squint to see it!

Prince William and Kate Middleton's three children obviously hold a special place in their great-grandmother's heart. So it's absolutely no surprise that the queen has a photo of Prince George, Princess Charlotte, and Prince Louis hanging up in her home, which made an appearance in the background of her first virtual diplomatic audience late last week.

Queen Elizabeth II recently met with foreign ambassadors from her home in Windsor Castle. Typically, the Queen meets with new incoming ambassadors in person, but this virtual meeting was done with current health guidelines due to the coronavirus in mind, according to Vanity Fair.

A Buckingham Palace spokesperson elaborated on this decision to Harper's Bazaar. "Diplomatic audiences are a long standing and traditional part of the monarch's role and the hope has been to restart them as soon as possible," the spokesperson said. "A variety of options were considered in line with current guidelines to reintroduce diplomatic audiences while retaining some of the long-established ceremonial elements, such as the use of Buckingham Palace."

During this meeting, the queen sat behind a desk, with a framed photo of Prince George, Princess Charlotte, and Prince Louis behind her. Sure, you might have to squint to see the dark and grainy photo of the Duke and Duchess of Cambridge's kids, but it's still sweet to see nonetheless.

The queen is a big fan of displaying family photos. During the her annual Christmas speech, she often displays family photos on her desk that are a reflection of her year, according to Town & Country. Her using this photo of Prince William's three adorable kids is just another example of the love she has for her great-grandchildren.

Royal fans can only hope that the family releases a full-size, high definition version of this photo sometime soon. Because who doesn't love seeing new photos of Prince William's adorable kids?