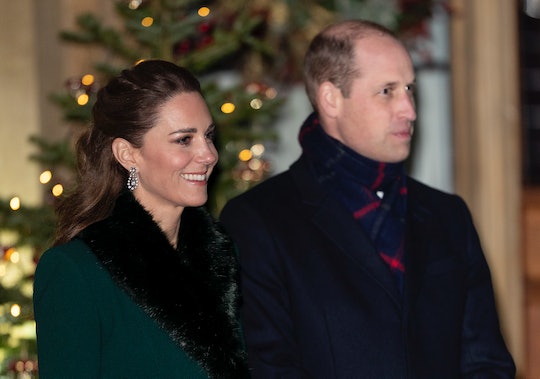 No big Sandringham holiday in 2020.

The royal family's Christmas traditions are going through a real upheaval this year. First Queen Elizabeth and Prince Philip announced their plans to stay at Windsor Castle alone, and now Kate Middleton and Prince William's Christmas plans with the royal kids are still up in the air just weeks before the big day. I'm sure they will make a decision in time for Santa to visit their kids...

The Duke and Duchess of Cambridge recently embarked on a short tour across England, Scotland, and Wales on the royal train in an effort to spread a little Christmas cheer. The couple have visited several individuals and organizations throughout the United Kingdom to thank them for going "above and beyond to support their communities" during the coronavirus pandemic, as per a statement released by Kensington Palace.

While meeting with students from Cardiff University in Cardiff, Wales on Tuesday, Prince William addressed the couple's own plans for Christmas cheer this holiday season; they're just not sure at this point who they will be with this year, as the Daily Mail reported. "It is so difficult, we are still trying to make plans. It's difficult to know what to do for the best," Prince William said.

The couple have traditionally spent every other holiday with the royal family in Norfolk County at Queen Elizabeth's Sandringham Estate. The years not celebrating with the royals have been spent with Middleton's family at their home in the Berkshires, Bucklebury Manor. While this would normally be the year the family went to Bucklebury, that might not be the case. Carole Middleton, grandmother to 7-year-old Prince George, 5-year-old Princess Charlotte, and 2-year-old Prince Louis, said in a recent Instagram post for her company Party Pieces, that she was planning on seeing her grandchildren over the holidays, "For me, what really matters is that my family feels connected. I normally let my grandchildren help me decorate the tree. This year, I’ll ask them by video call to decide which decoration should go where. It may need to be tastefully rearranged later…!"

As Queen Elizabeth will be celebrating alone at Windsor Castle, Prince Charles is expected to stay in Gloucestershire this year, as per Hello!. Prince William's brother Prince Harry is reportedly staying in California with his wife Meghan Markle and son Archie for Christmas, which means the royal family is all over the map this year.

Perhaps this year Kate Middleton and Prince William can do what so many of us are doing; hunker down at home for the holidays. And wait for 2020 to be over.

More Like This
Andy Cohen's 3-Year-Old Son Ben Has Officially Taken Over An Important Hanukkah Tradition
Ryan Reynolds' Daughters Have Watched 'Elf' Thousands Of Times, Just Like The Rest Of Us
How Old Should Kids Be Before They Watch The 'Christmas Story' Sequel?
20 Of The Best Christmas Movies For Kids