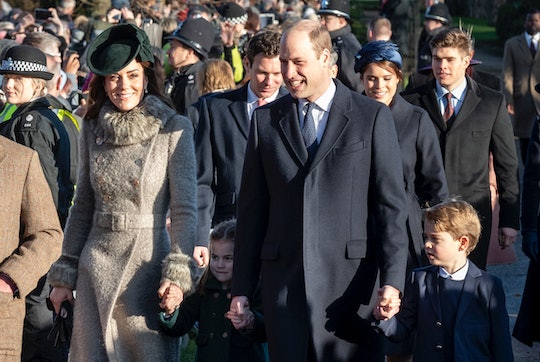 The royal family is all about tradition at Christmas. This year, for instance, the Duke and Duchess of Cambridge took their family to Norfolk County in the United Kingdom to celebrate the holidays with the Queen at her Sandringham Estate. Once Christmas is over, however, they appear to be a little more free to do as they please, which means that Kate Middleton and Prince William's New Year's Eve plans might not be a big, splashy affair this year. In fact, they might want to ring in 2020 quietly with their three kids.

The Duke and Duchess of Cambridge appear to prefer a quiet life at their country home of Anmer Hall in Norfolk County with their three kids, 6-year-old Prince George, 4-year-old Princess Charlotte, and 1-year-old Prince Louis, whenever they're not on royal duties. And now that Christmas has come and gone, they might have the chance to hang out and enjoy some down time as a family with royal duties on hold until the new year.

Historically speaking, they seem to spend the new year with Middleton's side of the family at their country home of Bucklebury in the Berkshires. The first New Year's Eve they spent as a married couple in 2011, for instance, Carole and Tony Middleton (who own a party supply store) rented a 100-person tent for a backyard party to ring in 2012. The tent, according to the Daily Mail, is called a "kata" and is traditionally used for reindeer herders in Lapland. Perhaps not terribly low-key, but it sounds like a blast.

Their lives have changed considerably since that first New Year's Eve, but it seems as though their plans rarely stray too far from what they liked to do back then. Carole and Tony Middleton must be amazing hosts. The family will likely head to Bucklebury to ring in 2020 if their previous plans are any gauge at all, per the International Business Times, although a big party might not be in the works considering there are little ones to consider this year. Not just the three Cambridge kids, but also Pippa Middleton's 1-year-old son Arthur with husband James Matthews. Pippa Middleton just spent Christmas at St. Barth's with baby Arthur, husband James, and her parents, according to People, so she might be ready for a cozy night in herself. Well, cozy alongside four small children, of course.

After a long year spent largely in the public eye, I hope Prince William and Kate Middleton can enjoy some low-key New Year's Eve fun with their family this year. Because 2020 is just around the corner and with it will presumably come a whole new crop of royal duties.