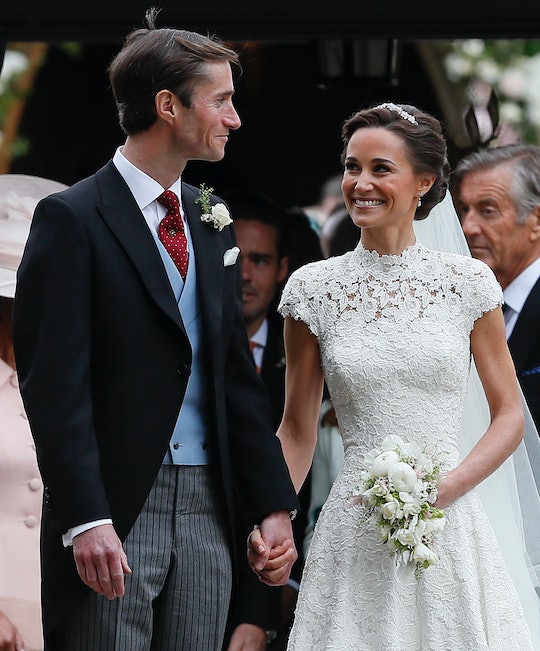 It's been just about year since the world learned that Kate Middleton's younger sister, Pippa, had officially joined the mom club. That also means Pippa Middleton's son's birthday is just around the corner. Indeed, Middleton, who's been married to hedge fund manager James Matthews since May 2017, will be celebrating her son Arthur's first birthday in a matter of days.

Middleton and Matthews' baby boy, whose full and totally regal British name is Arthur Michael William Matthews, was born on Oct. 15, 2018 at the Lindo Wing of St. Mary’s Hospital in London, according to The Telegraph, which is the same location the Duchess of Cambridge welcomed her three children. A day after his birth, a representative for the couple told USA Today that little Arthur weighed 8 pounds and 9 ounces and that "Everyone is delighted and Mother and baby are doing well."

With his first birthday just days away — in 2019, his Oct. 15th birthday falls on a Tuesday — baby boy Arthur has presumably grown up quite a bit since his parents announced his birth. And according to a new column penned by Middleton in Waitrose Weekend, a magazine for the U.K. grocery store chain Waitrose, the mom of one shared that at nearly a year old, her son Arthur has lots of energy.

"Now that Arthur is 11 months old and more mobile, I have been trying to come up with different activities to do with him," 36-year-old Middleton recently wrote for Waitrose Weekend, according to Hello! Magazine. "I needed to find something more than just park walks in the pram. Our local baby gym has been a saving grace. It’s a big space full of fun, soft objects, play mats, stairs, balls, swings, mini trampolines, and more to stimulate and physically engage babies and toddlers."

Middleton added in the same column, according to Metro, that the baby gym classes she attends with Arthur help him "[burn] lots of energy in this safe environment and learns many physical skills." She added, "I have also noticed him building his confidence with each visit."

This isn't the first time Middleton, who hasn't publicly shared any photos of son, has opened up about her activities with her baby boy. Back in April, Middleton revealed that she enrolled Arthur in swimming lessons at 4 months old in another column for Waitrose Weekend. "Starting my son Arthur swimming at four months old has given him confidence and enjoyment in water," the monthly fitness columnist wrote in the spring, according to People. "He’s now six months old, and swimming is one of our favorite activities. "The exercise helps guarantee sound daytime sleeps, and the movement has improved his digestion."

Though Middleton has only shared a few updates about her son over the past year, it sounds like whatever she and Matthews have planned for their son's first birthday will be... sporty? And who knows, maybe Arthur's royal cousins — Prince George, Princess Charlotte, and Prince Louis — will be there and show him how to blow out his birthday candle.

More Like This
It’s Britney(‘s Birthday), Bitch!
Julia Roberts Shared A Rare Photo Of Her Twins Hazel & Finn On Their 18th Birthday
David Beckham Impressed Mariah Carey With His Rendition Of "All I Want For Christmas"
Julia Louis-Dreyfus Holds Hands With Son Charlie Hall At White House State Dinner