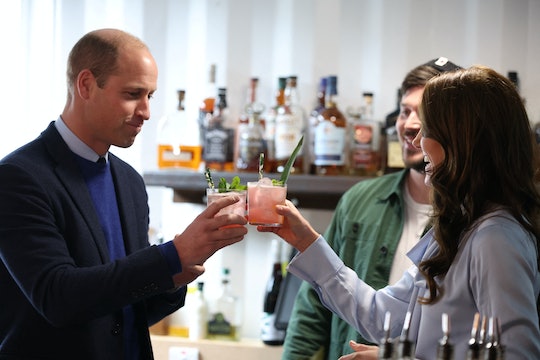 But let’s be honest... are there really any losers in such a competition?

When the Prince and Princess of Wales visited Belfast on Thursday, they were asked to participate in a cocktail-making contest. And before you start assuming that the ever-accomplished Kate Middleton was victorious, don’t count Prince William out just yet. He does have a whole lot of experience as personal bartender to his wife, after all. He clearly knows a thing or two about how to mix a solid cocktail.

The couple stopped in for a visit to Trademarket, a new open-air food and retail market in the center of Belfast, to check out the local bar. And to find out who can whip up a cocktail faster. The couple were instructed separately and worked with two different bartenders to see who might be faster at putting together a nice little pink cocktail with garnish. Certainly my money would have been on Middleton simply from seeing how much she invested she was in making that cocktail in a video of the contest shared by the couple’s official social media account with the caption, “Who did it better?”

But it seems I would have been wrong. Prince William reigned victorious. But in the end they were both winners because they got to have a little “Cheers” and drink to their own hard work.

Prince William has some experience in mixing cocktails, of course. He reportedly makes his wife a cocktail in the evenings after they’ve put 9-year-old Prince George, 7-year-old Princess Charlotte, and (most of all) 4-year-old Prince Louis to bed. That way she can enjoy her soothing nightly routine of online shopping and watching YouTube makeup tutorials with a delicious cocktail to swirl.

While Middleton certainly reaps the benefits of having a mixologist for a husband, she presumably felt a bit stung by defeat. This couple have a history of “friendly” competition that they both seem to take pretty seriously whether they’re sailing against each other, golfing, or just trying their hand at amusement park games. Whatever the competition might be, royal fans can count on both Middleton and Prince William really throwing themselves into it.

At least this friendly cocktail competition in Belfast ended with both of them getting a drink. And hopefully Prince William now has a new recipe for his evening repertoire at home. I guess that ultimately makes Kate Middleton the winner.