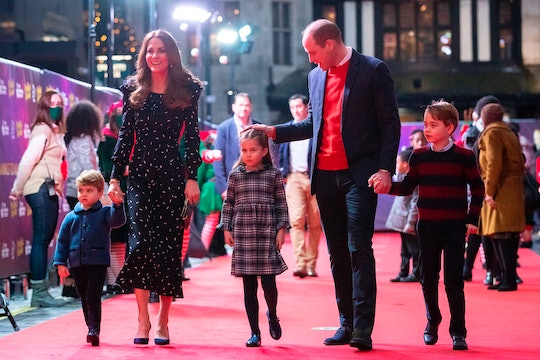 They have a life to live after the kids are in bed.

Kate Middleton and Prince William have a very good reason why they don’t bring their kids to very many official royal functions. Sure, they want to protect their privacy and have both spoken often about their wish for their children to have as “normal” a life as possible. But it isn’t just that. It seems the Duke and Duchess of Cambridge have a particularly “strict” rule about bedtime that they’re not willing to break for royal outings.

Royal expert Duncan Larcombe explained to Good To Know why the royal kids didn’t join their parents at the recent Christmas Carol Service at Westminster Abbey (where Middleton played the piano for the first time in public). While it seemed like a pretty kid friendly event, the timing did not fit into their bedtime schedule; “It was on a school night and they are pretty strict,” Larcombe told the outlet. “The children are in a rather strict regime so that might have been the reason.”

I guess their mom can just play piano for them at home some time.

Kate Middleton is strict about bedtime for her kids.

It makes sense that Middleton would want her kids to stick to their bedtime, especially since it sounds as though she really lives a life once the kids have gone to sleep. Prince William reportedly makes her a cocktail after they’ve gone to bed, which sort of sets the tone for the rest of the night. Sources close to the couple shared details about what an average night at home looks like for the Duchess of Cambridge, and it seems she’s all about watching makeup tutorials on YouTube and enjoying some online retail therapy.

After a year of homeschooling her kids like everyone else, those precious hours of independence after they’ve gone to bed probably feel even more precious now than they did before the pandemic. She did describe parenting during lockdown with one perfect word, “exhausting,” back in January.

No wonder she and Prince William are dedicated to keeping their kids on a strict bedtime schedule. They know a good thing when they see it.