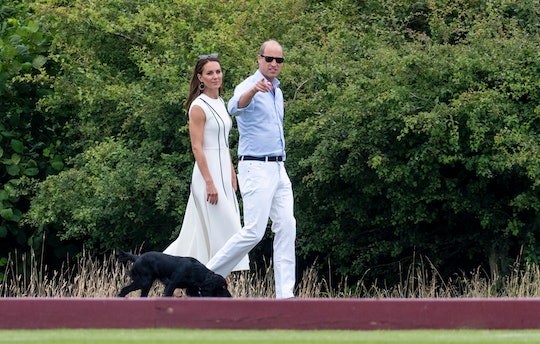 If you’re a royal watcher and have been wondering who won the charity polo match Kate Middleton and Prince William attended recently, let’s all agree it was their adorable puppy Orla. Sure, the polo players did a very fine job at their part as well, but ultimately no one could take their eyes off the Cambridges’ surprise furry guest. Especially not the Cambridges themselves.

The couple attended the Out-Sourcing.Inc Royal Charity Polo Cup 2022, where seasoned player Prince William naturally took part in the match and wife Kate Middleton, who is reportedly a bit nervous of horses, kept her two feet on the ground on the sidelines. She also brought along a little pal to keep her company and perhaps keep her from feeling too anxious with all of those horse hooves pounding so close.

Orla, the sweet little spaniel the family adopted in May after the sad loss of their dog Lupo, made her first royal appearance with Middleton and Prince William at the sporting event near Windsor Castle. And naturally she was an absolute hit with everyone. Not the least of which being the duchess, who seemed to be having a lovely time petting Orla while enjoying a cocktail. The only way to really enjoy a polo match in my opinion.

Orla, whose name is Celtic for “golden princess,” was a gift from Middleton’s dog-loving brother James, just as Lupo had been before her. And James seems to be gifting his family with exceptionally well-behaved little spaniels, because Orla was the absolute picture of composure.

Orla’s presence seemed to really bring something out in Middleton and Prince William, who celebrated their 11th anniversary in April. The traditionally PDA-free couple were getting a little handsy at the polo match. Walking around with their arms around each other.

Considering this was Orla’s first royal event, it really went off without a hitch. She hung out with Middleton. She gave off such good energy that the Cambridges got a bit touchy-feely. Essentially she was the perfect companion for a day at the polo match. Good dog, Orla.