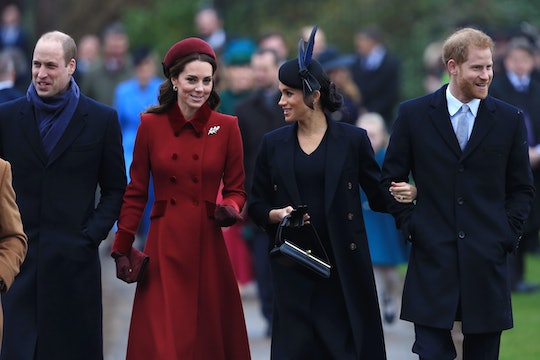 Their sweet words were especially personal.

Do you know what really brings a family together? A new baby. Even if that family is the royal family and even if they’ve been struggling with a very public rift. A new baby can go a long way to healing wounds. And while the public doesn’t really have any way of definitively confirming whether or not the birth of Meghan Markle and Prince Harry’s daughter has healed the rift between her father and the Duke and Duchess of Cambridge, there is a certain warmth in their message that speaks to a healing. Prince William and Prince Harry are brothers, after all, and sometimes they might just need to be reminded that their relationship comes before their royal roles.

Markle and Prince Harry announced the arrival of their second child on Sunday via their Archewell website, “It is with great joy that Prince Harry and Meghan, The Duke and Duchess of Sussex, welcome their daughter, Lilibet ‘Lili’ Diana Mountbatten-Windsor, to the world. Lili was born on Friday, June 4 at 11:40 a.m. in the trusted care of the doctors and staff at Santa Barbara Cottage Hospital in Santa Barbara, CA,” going on to explain that their little girl’s name has a special meaning: “Lili is named after her great-grandmother, Her Majesty The Queen, whose family nickname is Lilibet. Her middle name, Diana, was chosen to honor her beloved late grandmother, The Princess of Wales.”

The entire royal family immediately offered their own messages of “delight,” but there was something especially moving about the message from Prince William and Kate Middleton.

Meghan Markle and Prince Harry receive a personal message from the Cambridges.

They shared a pregnancy photo taken in the garden of Markle and Prince Harry’s California home with their 2-year-old son Archie, already a big break from tradition for the royal family as they tend not to acknowledge much about Prince Harry’s post-royal life unless they need to address a crisis (like that Oprah Winfrey interview). But it was the informal message that really seemed to speak volumes, “We are all delighted by the happy news of the arrival of baby Lili. Congratulations to Harry, Meghan and Archie.”

The use of their first names, “Harry, Meghan, and Archie,” are more personal, and a real departure from the usual “Duke and Duchess of Sussex.” As well as the immediate use of Lilibet’s nickname “Lili.” A reminder, in a way, that this is a new niece for Prince William and Kate Middleton. Another little cousin for their own children.

A reminder that family ties like the ones that bind Prince Harry and Prince William are strong enough to withstand a rift. Particularly after the two suffered the shared experience of losing their mother at such a young age. As Prince Harry said in that famed interview with Oprah Winfrey in March, “You know, as I've said before, I love William to bits. He's my brother. We've been through hell together. I mean, we have a shared experience. But, you know, we're on different paths. The relationship is space, at the moment. Time heals all things, hopefully.”