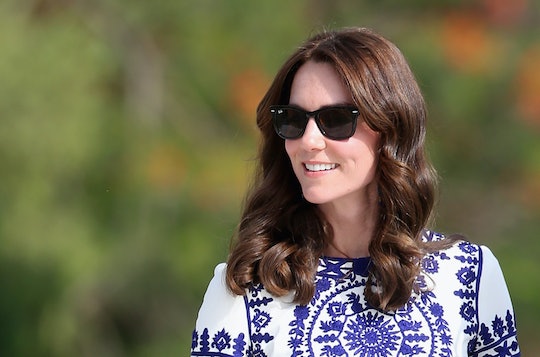 More than one, in fact.

When Prince William and Kate Middleton head out the door of Kensington Palace to live their lives, it’s no easy feat. Constantly surrounded by security detail, royal fans ever watchful of the chance to spot their familiar faces. So what do they do when they want to fly under the radar? They use secret code names. And Kate Middleton’s secret code name is especially cool, sort of like a mid-century comic book character, in fact. Prince William’s is pretty good too, of course. Just not as good.

When the Duke and Duchess of Cambridge travel privately, The Express reports, they do so under different names. Prince William reportedly uses the name Danny Collins, keeping those DC initials perhaps in case he gets a bit confused about his alias. And Kate Middleton’s alias also has DC initials. She reportedly travels as Daphne Clark. Which sounds like the alias of a World War II-era superhero fighting injustice in the world, if you ask me.

While Daphne Clark is obviously a very cool secret code name, Middleton also uses another more obvious alias while out in the world as a somewhat private citizen. Or at least she did in the early days of her marriage to Prince William when the couple were living in Anglesey Cottage in Wales. As the story goes, Middleton wanted to put a wet suit on hold in 2012 until she could come back and buy it. The Sun reports that she wasn’t recognized by the salesman, who asked for her name. “Mrs. Cambridge,” she responded without batting an eyelash. What a thrill it must have given her to go unrecognized for a moment.

Her oldest child, 9-year-old Prince George, has also famously given himself a secret code name in the past. When he met a dog walker in the park in 2019 with his grandmother Carole Middleton, he told her his name was “Archie.” Just four months later, his aunt Meghan Markle gave birth to his cousin Archie Harrison Mountbatten Windsor. Perhaps he was just trying the name out for good measure.

Or inventing a secret life to go along with his mom, AKA Daphne Clark.

More Like This
Kate Middleton Once Gave Prince William A Nickname That'll Make You Clutch Your Pearls
Princess Charlotte Had A "Lovely" 7th Birthday, According To Her Parents
The Cambridge Kids Could See A Big Change At Their New House
Prince George Was Invited To A Birthday Party & His Parents RSVP'd So Sweetly