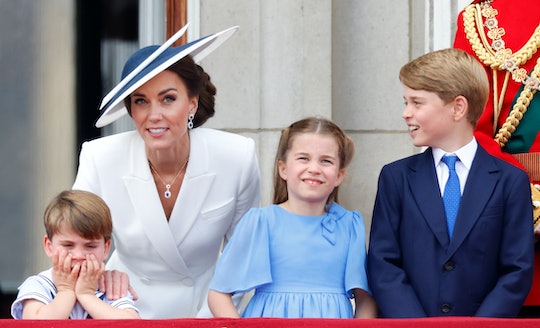 She kicked off her shoes to keep up with them.

Kate Middleton’s not about to let a little thing like a packed schedule full of royal engagements keep her from enjoying summer holidays with her kids. The mom of three took the Cambridge kids out for a day at a trampoline park recently, and apparently had no trouble “blending in” with the other moms there. Perhaps because they’re all so busy keeping a weather eye on their own that Middleton could walk by in a tiara and they wouldn’t notice her.

A source told Hello! that Middleton is apparently a frequent visitor at a local trampoline park in south-west London with her three kids, 8-year-old Prince George, 7-year-old Princess Charlotte, and 4-year-old Prince Louis. “Kate takes her kids to the trampoline park quite regularly and really blends in as any other mum,” the source told the magazine. “She went a couple of Saturdays ago with George and Louis and took her shoes off like everyone else and was walking around the edge of the trampolines following her sons. It was a very down-to-earth mum moment, very sweet.”

Considering Prince Louis has a bit of a reputation as a wild card and a rambunctious 4-year-old, no wonder Middleton felt the need to ditch her shoes and jump into action. We all remember his adorable antics from the Platinum Jubilee, after all.

Both the Duke and Duchess of Cambridge have made it patently clear that they plan to raise their children with as normal a life as possible, given that they are third, fourth, and fifth in line for the throne. The family spends a lot of time at their country home of Anmer Hall in Norfolk County, where all the kids help out with the many farm animals they’ve acquired over the last few years. And when they are out and about in London, both parents have been spotted doing pretty regular stuff with their kids. Going shopping for shoes, chasing Prince Louis around on his bike in Hyde Park. The kind of thing the rest of us take for granted as just a normal day.

But for these royal parents, outings like the trampoline park have a deeper significance. They are a sign of how committed they are to giving their children a normal life regardless of their royal status. Committed enough to spend a day at a trampoline park, which is pretty committed.

More Like This
Princess Charlotte Had A "Lovely" 7th Birthday, According To Her Parents
The Cambridge Kids Could See A Big Change At Their New House
Queen Elizabeth Doesn’t Really Get Eat-In Kitchens
Kristin Bell Shared Some Sweet, Rare Photos Of Her Daughters From A Family Vacation