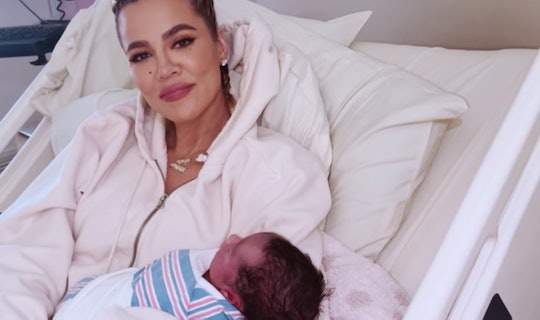 Khloé Kardashian Shares First Look At Her Son & His Birth

“This is going to be the start of something positive and happy and beautiful.”

The first episode for the new season of The Kardashians dropped on Thursday and it was an emotional roller coaster. The premiere episode focused squarely on Khloé Kardashian welcoming her baby boy, making 4-year-old daughter True a big sister, and even included some footage from after his birth via surrogate.

The Good American designer and Tristan Thompson welcomed a baby boy together at the beginning of August via surrogate. This baby boy, whom Khloé has chosen to keep out of the spotlight, arrived months after Thompson fathered a baby with another woman. It was obviously a stressful, difficult, confusing time for Khloé, but fortunately her family really showed up for her in the first episode of The Kardashians Season 2. Sister Kylie Jenner, herself a mom of a baby boy, offered Khloé some cute baby hand-me-down clothes, while sister Kim Kardashian assembled family members to rally around Khloé. And her daughter, True, who was seen in the episode proudly telling people, “I’m having a baby brother!” even as her mom was trying to keep things private.

While much of the episode was centered on Khloé’s fears, about how the public would treat her once they found out about the baby and about becoming a single mom of two, her family helped her turn it around. Kris Jenner took her baby shopping and threw her a Leo-themed baby shower, where the family discussed “T” names for baby boys.

Kim Kardashian, who herself welcomed 4-year-old daughter Chicago and 3-year-old son Psalm via surrogate, offered helpful insight into the baby’s birth and joined her sister at the birth of her nephew. The mom of four documented the journey on her phone, while protecting the privacy of the surrogate, and yelled out, “He’s gorgeous! He looks just like True!” when he was born. Khloé started out by saying, “I’m not ready,” but when her son arrived, things changed.

“I am so grateful. It’s such a beautiful gift that we’re able to have,” Khloé said in a confessional after her son’s birth. “Ever since December, it’s been this dark cloud looming over me. Every single day, I’ve been feeling depressed and sad, and now that my son is here, I get to move on, and I get to enjoy. It’s almost like I get to close that chapter and be done with this trauma and put it behind me.”

Khloé held her baby boy on her chest, looking truly in love with him, and went on to explain, “Now I finally get to start the healing process. Now I get to start enjoying my life with two kids in it and figuring this out. This is going to be day one, and this is going to be the start of something positive and happy and beautiful.”

As for True, she met her brother on FaceTime and said, “Hi Snowy!” That might not be his name, but still. A happy ending all around.