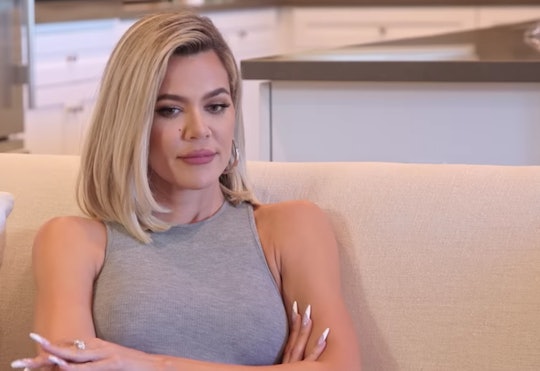 “It’s supposed to be a really exciting time, and it’s just a different experience.”

Khloé Kardashian’s experience with welcoming her baby boy is going to be addressed in the new season of The Kardashians on Hulu, and a sneak peek of the moment she decides to talk about it is just heart-wrenching. Because, as she explains in the trailer, “it’s supposed to be a really exciting time” for her and ex-boyfriend Tristan Thompson to welcome their second child together. Sadly it did not go exactly as planned.

The Good American designer became a mom of two on Aug. 8 when she welcomed a baby boy, whose name she has not yet released, via surrogate, making 4-year-old daughter True a big sister. “Tristan and I are having another baby,” she explains in the trailer for The Kardashians, referring to True’s father, basketball player Tristan Thompson. The couple’s relationship came to an end months before the baby boy’s birth when Kardashian discovered that Thompson had been with another woman and was, in fact, expecting a baby with that woman without telling Kardashian. This was not the first time the NBA player had been unfaithful; in fact, True’s birth in 2018 was also surrounded by cheating drama.

This time around, however, Kardashian was in a different position. And she got emotional talking about it in the trailer.

“It’s supposed to be a really exciting time,” Kardashian said in a shaky voice in the trailer. “And it’s just a different experience.” Kris Jenner was also featured in the trailer, telling the camera tearfully, “It’s hard to watch her in pain.”

While Kardashian admitted that “this has been a difficult time in my life,” she was also doing her best to be hopeful about her future. “But it’s the start of something positive and happy and beautiful,” she added.

Now that her son has arrived, the proud mom is understandably keeping his first few months to herself. The high level of criticism she and the rest of her family receive on a daily basis can’t make those early days of parenting easy, particularly when she struggled emotionally in the months before her baby boy arrived. “People give unsolicited commentary no matter what you do. So I try and keep True stuff as clear and simple as I can for her sake,” she told Cosmopolitan UK in December 2021. “I’ve learned that you can’t just post anything because people will comment and say the craziest things!”

Now she has two little people to protect. And at least when she shares her life on The Kardashians, she has some editorial control over what she’s willing to talk about.