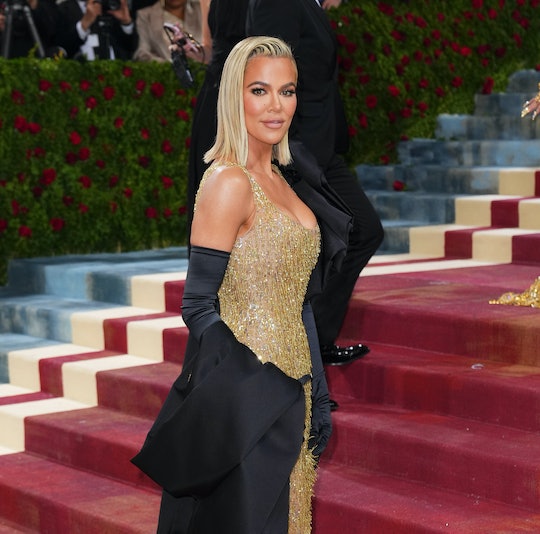 She is already a mom to True, 4, with ex-boyfriend Tristan Thompson.

Khloé Kardashian’s new baby has been born! A rep for The Kardashians star confirmed on Friday, Aug. 5 that she welcomed a baby boy via surrogate with ex-boyfriend Tristan Thompson. The two already share a daughter, True, 4.

The announcement broke via Page Six, but no details were given on the baby’s exact birth date. An insider gave People details about Kardashian’s reaction to the baby on Sunday. “Khloé is on cloud nine,” the source told People. “Getting a sibling for True has been such a journey. She is very excited to be a mom again. She really wanted a baby boy.”

It appears she is taking after her sister, Kylie Jenner, and not naming her baby boy right away. The Kylie Cosmetics founder is mom to Stormi, 4, and a 6-month-old baby boy with Travis Scott, whom she originally named Wolf but decided to change his name and has so far kept it a secret. For her part, Kardashian is in no rush to reveal her baby boy’s name.

“Khloé hasn't shared a name yet,” the source told People. “She is taking her time with the name. She wants it to be just right.”

A rep for the star confirmed the pregnancy in July.

“We can confirm True will have a sibling who was conceived in November,” Kardashian’s rep shared in a statement with People at the time. “Khloé is incredibly grateful to the extraordinary surrogate for such a beautiful blessing. We'd like to ask for kindness and privacy so that Khloé can focus on her family.”

The Good American founder and NBA player have dated off and on for years, breaking up again for the most recent time in December 2021. An insider told E! in July, “Khloé and Tristan are not back together and have not spoken since December outside of co-parenting matters.”

True was born on April 12, 2018, just days after rumors that Thompson was cheating on her. In February 2019, Thompson cheated on Khloé with Kylie’s friend Jordyn Woods, but they ended up quarantining together in 2020 and decided to have another baby.

“True's getting older and I feel like it's now time to have another kid,” Kardashian said to Thompson in a 2021 episode of Keeping Up With The Kardashians, per E!.

“I'm gonna need you. We have to line it up with your schedule so I can make embryos with my frozen eggs,” she added. “I think I'm ready to do the whole pregnancy thing again. This process might take time. I have no idea. I want to be prepared.”

Of course, True is technically already a big sister, as Thompson welcomed a baby named Theo with Maralee Nichols in December 2021. He confirmed that he was the father via Instagram story, per People. "Today, paternity test results reveal that I fathered a child with Maralee Nichols. I take full responsibility for my actions,” he wrote.

“Now that paternity has been established I look forward to amicably raising our son. I sincerely apologize to everyone I've hurt or disappointed throughout this ordeal both publicly and privately,” he added.

Thompson is also a dad to Prince, 5, with Jordan Craig. In Oct. 2021, he posted a photo of True and Prince on Instagram playing arcade games. He captioned it, “Let me love you a little more, before you are not so little anymore #MyEverything❤️❤️”

Kardashian hasn’t shared any pictures of her new baby boy yet, but she did share a sweet picture of True on Instagram yesterday.

“My happy sweet girl 💕,” she captioned it, alongside a photo of True smiling near a display of pink roses.

Despite the drama and cheating scandals, a new baby is always exciting. It’s great to hear that Kardashian is enjoying her new baby, despite the fact that her romantic situation has changed since the baby was conceived.