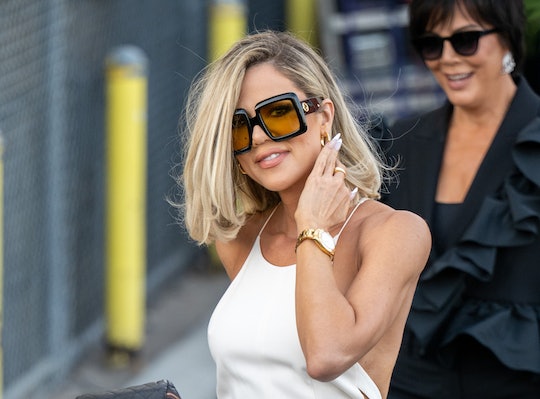 A hint of blue for the mom of two!

Khloé Kardashian officially became a mom of two on Friday when a surrogate gave birth to her second child with ex-boyfriend Tristan Thompson. And while the Good American designer is keeping her first days with her baby to herself, she did pay a subtle little tribute to her newborn son in a recent outing. Because why not accessorize with a touch of blue to honor her little boy?

On Friday, a representative for The Kardashians star confirmed to People that she and her 4-year-old daughter True had a new little addition in their household, a baby boy. The representative declined to share the baby boy’s name, which seems to be a trend in the Kardashian/Jenner family these days (see Kylie Jenner’s baby boy formerly known as Wolf Webster). We might not know her baby boy’s name or too many other details about their life together at home as yet, but we do know that Kardashian carried a cute little bright blue purse on a night out at Nobu for dinner on Monday.

Which could be a way to keep her new status as a boy mom close to her heart. Or hand as it were.

Kardashian has long wanted to be a boy mom. After giving birth to daughter True in 2018, she tweeted about how she had really wanted a boy because of her close relationship with nephew Mason Disick. “I wanted a boy so badly Because Mason and I are so close. I love our bond,” she tweeted at the time before adding that she felt so “blessed” with daughter True. “I felt confident in having a boy but God blessed me with my precious True and now I wouldn’t know what to do with a boy. True has made me sweeter and more gentle. God gives you what you need. My BFF 4Life.”

The mom of two might have believed she wouldn’t know what to do with a boy back then, but it looks like she’s ready to learn now. Besides, she’s always been such a hands-on aunt to her nieces and nephews it’s not like it will be a stretch for her to figure it out with a baby boy.

She’s on the right path with her micro blue purse. Start with the right accessories and the rest will follow, that’s how it goes, right?

More Like This
Khloé Kardashian Shares First Look At Her Son & His Birth
Khloé Kardashian Chokes Up Talking About Expecting Baby #2 With Tristan Thompson
Alec & Hilaria Baldwin Welcome Baby #7, And Revealed Her Cheerful Name
John Mulaney Teaches His Son To Say "Ahh" After Drinking Water In A Super Cute Video