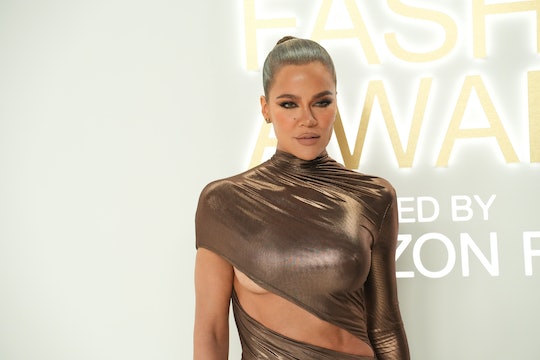 “Comes with the territory.”

Fans might not know the name of Khloé Kardashian’s baby boy and we might not be getting any photos of him any time soon, but we do know one thing. He can projectile vomit like nobody’s business. The normally glamorous mom of two recently shared a photo of a new look for her on Instagram — a sweatshirt sprayed with baby vomit. Because this is “mom life” whether you’re a super rich celebrity or otherwise.

The Good American designer took to her Instagram Story on Monday to share a slightly different side to that whole Kardashian lifestyle thing. Yes, she was still in full makeup with her nails and hair done and all of that. But do you know who didn’t care about her curated look? Her baby boy, who appeared to have vomited all over her sweatshirt. I think we can assume it was her baby boy, who she welcomed via surrogate back in August with ex-boyfriend Tristan Thompson, as the couple’s daughter True is 4 years old and a bit beyond the spit-up stage.

“It comes with the territory...,” she captioned the photo. “Mom life.”

Beyond sharing the contents of his stomach splattered on her sweatshirt, Khloé has been reticent about sharing too much information about her baby boy. Like his name, for instance, or photos of his face. Certainly fans who watch The Kardashians on Hulu will remember seeing his hair after he was born, and his big sister True proudly showed him off in his Tigger costume for Halloween. Which could be a hint about his name since his mom did say she wanted to give him a “T” name like True. Although Tigger is a bit of a specific name that might be tough to carry as he gets older.

As a single mom of two under 4 years of age, Khloé’s glamorous style might take a bit of a beating in the coming months. Between chasing after a toddler and getting thrown up on by a baby, it’s a good thing that she seems to take these little fashion disasters in stride as it “comes with the territory.”