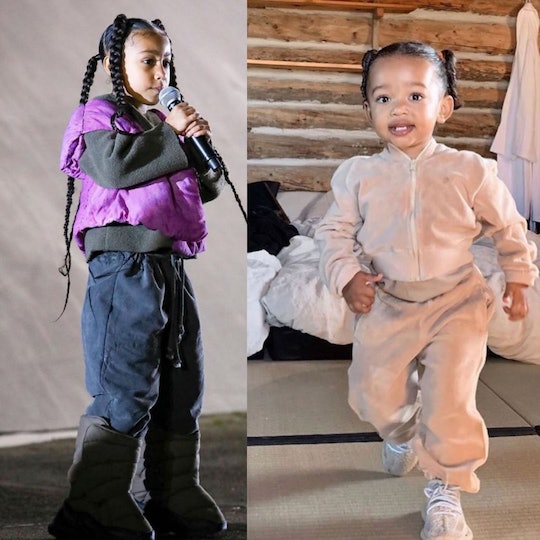 The Kardashian-West kids have always been dolls, so it only makes sense that Kim Kardashian would surprise her daughters North and Chicago with custom L.O.L. Surprise! dolls.

Kardashian recently debuted her daughters' new toys on Instagram and they really do look so much like 7-year-old North and 2-year-old Chicago. "I just wanna show you guys these L.O.L. dolls I had made for North and Chi, their favorite dolls are L.O.L dolls," Kardashian, who shares her daughters and sons, 5-year-old Saint and 1-year-old Psalm, with husband Kanye West, said.

The dolls, which were sent to the girls as a holiday gift from the company, were modeled after some adorable moments. Chicago's doll replicated the time she wore a beige, velour sweatsuit outfit while on vacation with her family in Wyoming, as Kardashian shared on her Instagram Story. Meanwhile, North's doll was based on her appearance at Paris Fashion Week last March when she made her "rap debut" during her dad Kanye West's Yeezy show, which was documented on a recent episode of Keeping Up With The Kardashians.

North has been a fan of L.O.L. for quite some time. In fact, she made her first runway debut at the L.O.L Surprise! fashion show back in 2018, rocking a Michael Jackson-inspired "Thriller" jacket. "North loves to dress up like her favorite characters, so it was so exciting for her to actually become a real-life L.O.L. doll," Kardashian said at the 2018 fashion show.

While custom L.O.L. Surprise! dolls like the ones Kardashian had made for North and Chicago aren't available for purchase, nor are the dolls of the girls, the company's many toys have long been a hit with kids. L.O.L Surprise!, which recently partnered with 6-year-old fashion influencer ZaZa for a collaboration with Puma, was on Amazon's Top 100 Toys List for 2020. So as it turns out, your kids and the Kardashian kids have the same taste in toys.