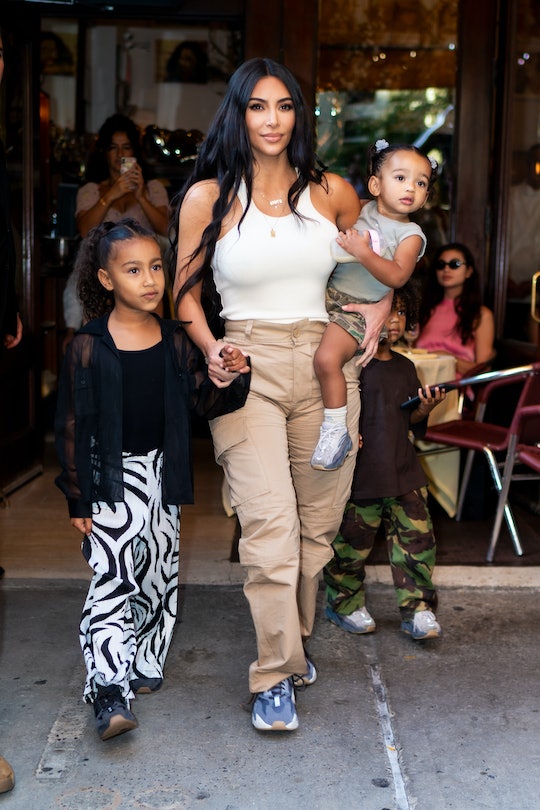 “As hard as it can be sometimes, I just want what’s best for the kids.”

It has been just over a year since Kim Kardashian announced that she and her husband Kanye West were getting divorced. And what a year it has been. Though Kardashian has been declared legally single, the dad of four has been very public about his displeasure with the end of their marriage. But, as she explained in a new interview with Ellen DeGeneres on Ellen, she’s trying to “take the high road” simply because she wants to do right by her kids.

Kardashian went on to explain that prioritizing the four kids they share, 8-year-old daughter North, 6-year-old son Saint, 4-year-old daughter Chicago, and 2-year-old son Saint, was something she learned from her own parents. “I always saw such a good example in my mom and my dad in their relationship,” she said. “So I’m always just hopeful. And no matter what goes on, it’s the father of my kids. I’ll always be protective. I’ll always want my kids to just see the best of the best.”

It’s not always easy, of course. Especially when her ex-husband calls her out on things he doesn’t approve of in such a public manner, like when their daughter North went live on TikTok without her mom’s knowledge, for example. Or fighting over son Chicago’s birthday party. Or the many, many social media attacks he has made against her new boyfriend Pete Davidson.

Despite all of that stress, which is certainly made more difficult by its very public nature, Kardashian told DeGeneres she has chosen to “take the high road.” Although she admitted it’s not always easy. “As hard as it can be sometimes, I just want what’s best for the kids,” she said.

It probably helps that Kardashian is trying to focus on her own life more than the “narratives” that used to concern her. “I just live my life the way that I think is right and that I feel is right in my soul, and just push forward and do the best that I can.”

More Like This
Tan France Reveals The Incredible Care Package Gigi Hadid Sent For Baby Ismail
Kourtney Kardashian & Travis Barker’s Kids Had Roles In Their Wedding
Meghan Markle Made A Sweet Little Tribute To Her Daughter Lilibet
Ray Liotta Has Died At 67. Not Only Was He An Iconic Actor, He Was A Proud Dad.