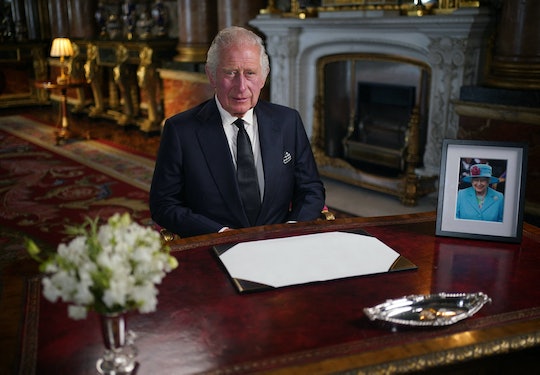 Queen Elizabeth, the UK’s longest-reigning monarch, died at the age of 96.

When Queen Elizabeth II died at the age of 96, Prince Charles immediately became the next Sovereign, King Charles III. The oldest to ever ascend to the crown, in fact, a moment he knew was coming the whole of his life. There were many detailed plans in place to prepare him for his new role following his mother’s passing, but when King Charles III addressed the nation for the first time as their king, he did so as a grieving son as he said farewell to his “darling mama.”

In a prerecorded speech delivered from Buckingham Palace on Friday, King Charles III paid tribute to his mother’s life of service, shared his gratitude for his own family, and his plans for the future.

“I speak to you today with feelings of profound sorrow,” he said at the outset of his first speech as monarch. “Throughout her life, Her Majesty The Queen — my beloved Mother — was an inspiration and example to me and to all my family, and we owe her the most heartfelt debt any family can owe to their mother; for her love, affection, guidance, understanding and example.”

King Charles went on to honor his mother for her seven decades of service to the British people and the Commonwealth, reminding viewers of a promise she made to commit herself to the crown with a “profound commitment to duty which defined her whole life.” A promise he plans to keep as well. “I too now solemnly pledge myself, throughout the remaining time God grants me, to uphold the Constitutional principles at the heart of our nation,” he said.

The new king went on to share his appreciation for the support from his own wife, Queen Consort Camilla and his heir Prince William and daughter-in-law Kate Middleton, who are now the Prince and Princess of Wales. “I want also to express my love for Harry and Meghan as they continue to build their lives overseas,” King Charles III added of his youngest son and daughter-in-law.

Perhaps the most emotional moment of King Charles III’s speech was at the end, when he clearly got emotional talking about his late mother. “And to my darling mama, as you begin your last great journey to join my dear late papa, I want simply to say this: thank you. Thank you for your love and devotion to our family and to the family of nations you have served so diligently all these years.”