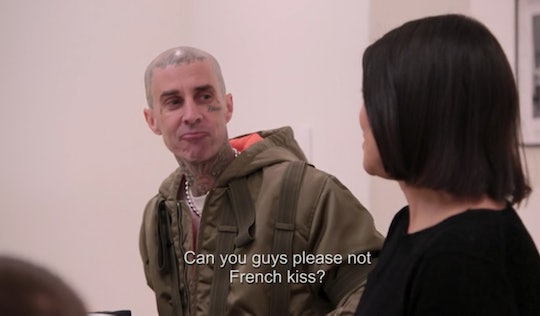 “I’m gonna die... you guys! Can you guys not kiss in French again?”

It’s been a running joke throughout the first season of Hulu’s The Kardashians. Kourtney Kardashian and Travis Barker really pack on the PDA. Kris Jenner has asked them good-naturedly to knock it off at the dinner table in a few episodes, Kourtney’s sisters have commented on it. But when Kourtney’s two younger children asked her repeatedly to stop kissing all the time, fans of the show felt that request hit a little different.

On Thursday night’s episode of The Kardashians, “This Is A Life Or Death Situation,” newly engaged Kourtney and Travis were dealing with fertility struggles as they are trying to concieve a child together. Together, the newly married couple has six children between them including Kourtney’s 12-year-old son Mason, 9-year-old daughter Penelope, and 7-year-old son Reign with ex-boyfriend Scott Disick. And it seems Penelope and Reign are really not interested in seeing their mom kiss a whole lot in front of them.

“Mom! No kissing!” Penelope says as soon when her mom greets Travis, with Kourtney asking her if it’s okay to have “just one.” Apparently her daughter even gave her kiss certificates, but when Kourtney teases her about those Penelope says, “Can I go home?”

It gets worse when the family, minus Mason, is sitting at the dinner table later and the PDA continues. And this time Reign has something to say about it. “I’m gonna die... you guys! Can you guys not kiss in French again?” While both Kourtney and Travis laughed, many fans took to Twitter to call them out for being a bit too affectionate in front of the kids.

It’s an awkward time for Kourtney’s kids, perhaps especially as they weren’t able to attend their mom’s proposal and Penelope in particular seemed to take that pretty hard. Another Twitter user called out the loved-up mom for not putting her kids’ feelings first with all that PDA.

More social media users called all the PDA cringey, with one Twitter user writing, “kourtney and travis are making it really frickin hard to watch the Kardashians literally ur cringe and ur kids are even bothered.” In fact, another Twitter user admitted they were trying not to watch scenes with the couple in them for that very reason, “i skip every scene with kourtney and travis bc they remind me of that weird and annoying couple that would always make out in the hallways in high school.”

While many viewers are happy for the couple, they do feel bad for the kids. “I’m all for love and happiness but Kourtney and Travis are just too much,” wrote one Twitter user, “why you licking the roof of each other’s mouths in front of your kids????”

It’s can be tough to find the balance between your new relationship and your kids when you find love as a parent. But perhaps the best thing to do is take your cues from your kids. If they beg you to stop kissing “in French,” maybe just stop. And it seems like Reign’s request got through to them. After Reign spoke out at the dinner table, Travis said quietly to Kourtney, “No more French kissing,” to which she replied, “Okay.”

More Like This
Kylie Jenner Shared A Precious Photo Of Her Baby Boy Snuggled On Travis Scott's Chest
Catherine Reitman Calls It Like She Sees It: “Being A Working Mother Is Impossible”
Sarah Michelle Gellar Is Facing A Terrifying Parenting Milestone: Sleep Away Camp
Lauren Conrad Shares Experience With "Lifesaving Reproductive Care" After Ectopic Pregnancy