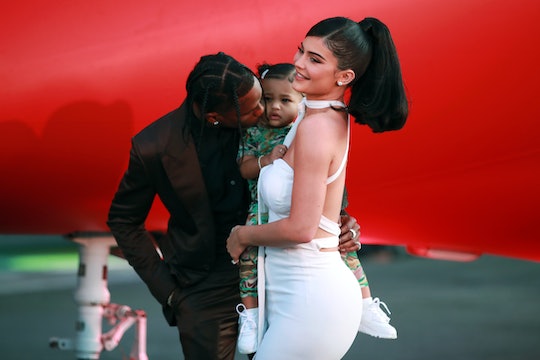 Beyond the sparkle, the rings also symbolize love and union.

Sometimes when a new sibling is being introduced into the family, parents might like to give their little one a small gift. A token to help ease them through the transition to becoming a big brother or sister. Sometimes that gift is a touch more high-end than a small trinket. Like Kylie Jenner and Stormi’s matching rings from Travis Scott. As the family continues to prepare for the arrival of their second child, 3-year-old Stormi can while away the hours marveling at her diamond ring.

The Kylie Cosmetics mogul is currently expecting her second child with Scott. This will make daughter Stormi a big sister for the very first time, a life changing role for the little girl. So why not mark the big event with diamonds for both pregnant Kylie and her daughter? The proud mom shared a photo on Instagram of the big sparkler on her finger and a slightly smaller one on her daughter with the caption, “daddy got us matching rings.”

The ring design is called “Toi est moi,” which translates to “You and me,” with the rings coiled around the finger and featuring two gem stones. In this case, two very large diamonds each. These rings generally are meant to symbolize love and union, according to Brides.

While Jenner wore the ring, which a jeweler estimated in an interview with Page Six would be worth around $325,000, on her index finger, it also looked as though she had some sort of a band on her ring finger. Hard to tell though. I was being blinded by the mother-daughter power of those diamond rings.

After going through a slightly rocky period last year, Jenner and Scott appear to be pretty happy together. Welcoming their second baby, spending time together, and of course raising daughter Stormi. The little family of three recently went out trick-or-treating together for Halloween in full costume, with Jenner dressed as a cat, Scott as Michael Myers from Halloween, and little Stormi as a mermaid.

While Jenner didn’t share the meaning behind the matching rings for both her and Stormi, it was a lovely gesture nonetheless. A reminder that their little family is a team, and that Travis Scott is thinking of them. And not that worried about a 3-year-old losing a ring that costs more than most cars.