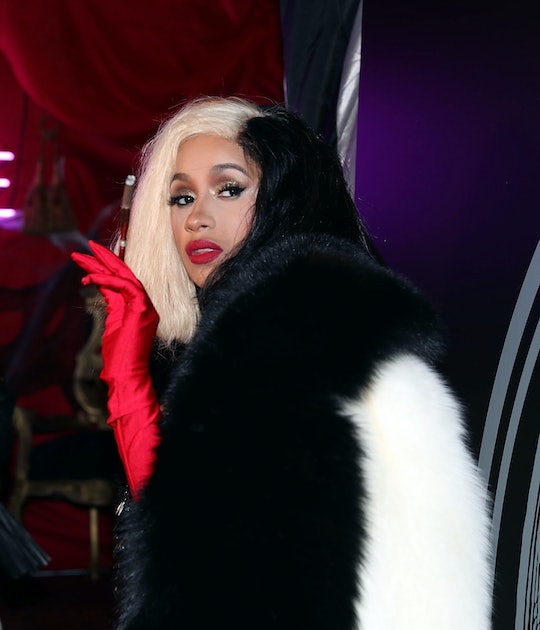 Choosing a Halloween costume that’s sure to make, shall we say, a splash is no easy feat, but these celeb parents clearly understood the assignment. From adorable to spooky to stylish and even matching ensembles, here’s a look at some of the best Halloween costumes worn by celebrities and their kids in 2021. So break out your notebook and jot down a few notes for next year because there are some seriously good ideas for yourself and your little ones below.

Cardi B & Her Daughter Kulture

This year, the “I Like It” rapper chose to match her 2-year-old daughter, Kulture, with their own incredible witch Halloween costumes. Kulture basically looked like a smaller version of her mom in her matching black dress and broomstick, and was serving some serious attitude when Cardi B recorded a video of her, posing for some photos all by herself. “Its Kulture eating up this photoshoot for me!! Sis said ‘hold my broom,’” one fan commented in a video that Cardi retweeted.

“We put a spell on you and now you’re ours,” the “Bodak Yellow” artist, who welcomed her second child with her husband Offset earlier this year, captioned her Halloween post on Instagram.

Kim Kardashian’s oldest child, 8-year-old daughter North West, hung out with her friends this Halloween and dressed like “Cereal Killers,” according to Kardashian’s pal, Tracy Romulus, who posted the photo to her Instagram account.

North and her friends opted for an edgy look this year, choosing to wear ripped up tights, platform boots, studded belts, and multi-colored wigs in a cool and hip kind of costume.

Kardashian and Kanye West’s oldest son, Saint, chose to emulate a figure from the super popular online game, Roblox, with a friend.

Kardashian and West’s youngest daughter, Chicago West, opted for a more traditional Halloween costume compared to her sister, wearing an all black witch costume, complete with a witch hat.

Kardashian’s youngest son, Psalm, chose to be a truck driver this Halloween. The little boy posed for his mom in a photo shared to her Instagram Story of him wearing a cardboard cut out truck attached to his shoulders.

Kylie Jenner, who is currently pregnant with her second child with Travis Scott, was in “full mommy mode” when it came time to trick-or-treating with their 3-year-old daughter, Stormi Webster.

The little girl wore a mermaid costume, all decked out in shells and pearls, while Scott went incognito in a super spooky mask.

Gabrielle Union and Dwyane Wade’s 3-year-old daughter, Kaavia James, had multiple costumes this Halloween, choosing to dress up as both something scary and something sweet.

Union posted a photo of her youngest daughter all dressed up as the icon and singer, Adele, with a gorgeous dress mimicking the singer’s own.

On Halloween, Kaavia opted for something a bit spookier, wearing zombie makeup alongside her parents and the sweetest little outfit to match.

The Watch What Happens Live host, Andy Cohen, and his son, Benjamin’s costumes were “out of this world” this year, with both of them dressing in the most adorable metallic astronaut costumes.

“We went tot SPACE tonight!!!!,” Cohen wrote in the caption of the photo.

When it came time to celebrating her son’s first Halloween, Mandy Moore went all out, opting to dress son, August, in two separate costumes.

August, who Moore and husband, Taylor Goldsmith, have nicknamed “Goosey,” paid homage to his nickname’s namesake by wearing the most adorable goose costume, complete with a stomach full of feathers.

But this This Is Us actress got a little help from the costume department of the show when she had a “#momfail” and ordered the goose costume a little too early and August outgrew it. But luckily, August had another costume to fit into if the Goose costume didn’t go according to plan.

Moore also posted a photo of August, dressed as a piece of nigiri, complete with a ginger and wasabi headband.

“It’s not your first Halloween unless your mom forces you into multiple costumes,” she wrote in the caption of the post. So true.

Australia Zoo wildlife conservationist, Bindi Irwin, her husband, Chandler Powell, and their daughter, Grace, all got into a groovy mood, opting for throwback costumes for their daughter’s first Halloween.

“Peace, love, and koala hugs,” Irwin wrote in the caption of the post. “Wishing you a groovy Halloween from our family to yours.”

MTV’s Jersey Shore star took to Instagram to share photos from her Halloween with her three kids — 9-year-old son, Lorenzo, 6-year-old daughter, Giovanna, and 2-year-old son, Angelo — who all dressed up in some sort of costume.

The mom-of-three opted for her own personal take on the 101 Dalmatians villain, Cruella de Vil, with her youngest son as a Dalmatian, and her daughter as a mini version of herself, of course.

Chrissy Teigen never does anything with half-effort, and her family’s Halloween costume proves it. The mom of two and Cravings author dressed alongside her husband, John Legend, and their two kids, Luna and Miles, as members of the Addams family.

I don’t know about you, but I think Teigen makes an amazing Morticia.

Neil Patrick Harris and David Burtka always seem to nail Halloween every single year, and this year was no exception to that. The How I Met Your Mother actor and their two kids — twins, Gideon and Harper — dressed up as famous scary movie villains in a cleverly edited photo, posted to Harris’ account on Halloween.

I don’t know about you, but I am terrified.

Jessica Simpson, husband, Eric Johnson, and their three kids — Maxwell, Ace, and Birdie — all dressed in their own unique costumes this Halloween. The two proud parents dressed as characters from the 1980 film, Caddy Shack, while their kids opted for some age appropriate costumes.

Golden State Warriors player, Steph Curry, dressed up with wife and cookbook author, Ayesha Curry, and their three kids — daughters Riley and Ryan and son, Canon — all opting for something different.

Oldest daughter, Riley, chose to dress up as Cruella de Ville, while 6-year-old Ryan looked like the cutest little fairy, and 3-year-old Canon was a little dinosaur. Even the parents had some fun dressing up as pirates.

Guardians of the Galaxy actress Zoë Saldana, and her husband, Marco Perego-Saldana, chose to do their own matching Nightmare Before Christmas costume while their three kids veered off from their parents.

“A Jack, Sally, shadow ninja, robot ninja, and a Transformer walk into a bar...,” Saldana wrote in the caption of the post.

Simple, but oh so cute.

Nick Cannon, Abby De La Rosa, and their twin sons, Zion and Zillion, chose to dress up in a matching Ghostbusters costume, with their twins as the Stay Puft marshmallow man for their first Halloween.

De La Rosa also dressed up the twins as a pack of Hostess Twinkies, and the twin-kies could not be any cuter.

For Ashley Tisdale’s daughter, Jupiter’s first Halloween, the little girl dressed as Max from the beloved children’s book, Where The Wild Things Are, while her and her husband dressed up as Wild Things.

What’s the fun in Halloween if you can’t dress up and be something (or someone) else for a change?