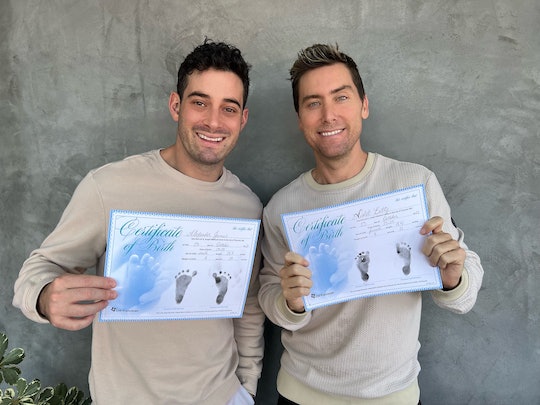 As a proud new dad to twins, Lance Bass is ready for his very busy social calendar.

One lovely perk about being a new parent is gaining a whole new group of friends. Or, even better, connecting with your current besties on a whole new level. It’s something Lance Bass and husband Michael Turchin have been looking forward to since becoming dads to twins, Alexander James and Violet Betty.

“Everyone’s having so much fun with their kids,” Bass tells Romper during a recent phone interview, “and we never got to go on family vacations with everyone. But now we’re invited.”

Now that the new dads are part of the club, Bass and Turchin may soon be managing a pretty busy social calendar. “We now know over 30 people that have had their baby this year or are pregnant right now,” Bass says.

Bass is also looking forward to all the future friends Alexander and Violet, who were born via surrogate in October, will have. “We are going to have a ton of friends that our kids are growing up with, which really excites me,” the former NSYNC member says. “There’s just so many of them.”

But what’s life like at home nowadays? According to Turchin, who is also an actor and visual artist, life with newborn twins is a little messy. Specifically, the 34-year-old Alien Abduction actor tells Romper their routine at home is a “chaotic, fun mess.”

“Every two to three hours we are changing and we’re feeding and I’m pretty much stationed on the couch all day,” Turchin says. But even though life is a bit chaotic right now, Alexander and Violet are fortunately pretty chill babies. “The twins are so great,” Turchin says. “They’ve been really easy and just real cool kids. We love every minute of it.”

In between couch feedings, Bass and Turchin will soon be able to retreat to their twins’ new “funky pop art nursery,” as Turchin described it. “It's just gonna be like a mishmash of colors,” Turchin says of the nursery designed by interior design service, Decorist.

And to help the new parents complete a registry and get all the items they need for their nursery, the couple recently partnered with buybuy Baby. But for Bass, the name itself was apparently enough of a draw. “Well, I like that it sounds like ‘Bye Bye Bye,’” jokes Bass. One item on their buybuy Baby registry Bass recommends to fellow new parents is the Graco Sense2Snooze bassinet, which they use when the little ones get fussy.

Though Bass and Turchin are busy with their nursery and general life with newborns, they’re really looking forward to celebrating Thanksgiving, Christmas, and Hanukkah with their families. It’s also an opportunity for relatives to meet the twins for the first time. But with new additions to the family comes new traditions.

“We're going to be doing a charcuterie Christmas,” Bass reveals. “We’re inviting a few of our close friends over. Everyone has to bring a charcuterie board of their choosing and they have to impress because it is a competition.”