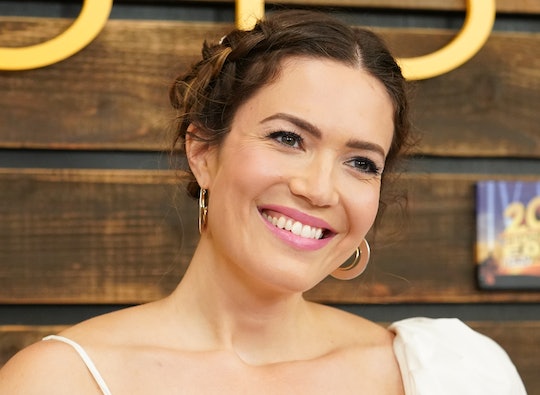 But not too much! It’s cold and flu season, after all.

Introducing your second baby to your first can be a tricky situation, especially when they are still a toddler and might feel slightly nervous and confused. Older children have certainly been known to lash out or act out or get jealous, but not Mandy Moore’s 21-month-old son Gus. Moore shared Gus’ reaction to meeting his baby brother Oscar for the first time, and he could not have been sweeter about becoming a big brother. This bodes well for Moore’s life with two kids under two.

Moore spoke to Access Hollywood recently about introducing Gus, her oldest son with husband Taylor Goldsmith, to the couple’s baby boy Oscar “Ozzie” Bennett, born mere weeks ago Oct. 21. “He’s been an incredible big brother thus far,” Moore gushed. “He obviously has sensed a shift in the house and loves his brother; our biggest hurdle right now is making sure he doesn’t kiss him too much, because it’s cold and flu season.”

The proud mom went on to say that Gus’s first instinct when he met his baby brother was to do just that, give him a big kiss. “When we brought Ozzie home from the hospital, and introduced Gus for the first time,” she explained, they brought a little gift technically from Ozzie for Gus, hoping to make the transition easier for him. They needn’t have worried. “The first thing he wanted to do was to kiss Ozzie, and that melted my husband and I immediately.” And the kiss fest continues even weeks after Ozzie came home, with no end in sight.

Gus’s enthusiasm for his baby brother is probably helped along by the fact that he continues to get lots of love and attention from his parents. Like when they dressed him up as an (admittedly disgruntled) duck for Halloween, or took him outside to try out his rubber boots in some puddles on a sunny day.

As Gus and Ozzie grow up together, things will shift and change over the years. But for now, Moore is just enjoying these precious early moments of watching that sibling bond grow. Letting Gus get in his brotherly kisses on “the top of the head or the bottom of the feet” instead of drooling directly into the baby’s mouth as she told Access Hollywood he tends to do.

It’s not the worst problem to have with two little ones.