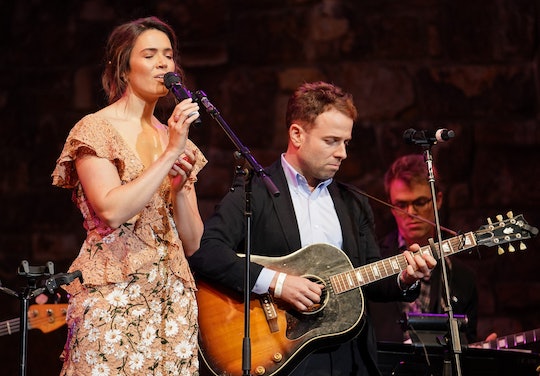 You’ll be singing this soothing song all day.

Although only a few months old, August Harrison Goldsmith is already learning the benefits of being born into a musically gifted family. The tiny tot’s parents, Mandy Moore and Taylor Goldsmith, wrote a lullaby for their son, which they sing to the tune of the Eagles’ 1973 hit “Desperado.”

“[Taylor Goldsmith] and I have been singing this song to our little guy since he was a [peanut] in my [womb],” Moore wrote when sharing a clip of Goldsmith playing the piano and singing the song on Instagram over the weekend. “Side note — you have the best dad, Gus.”

In the clip, Goldsmith plays “Desperado” on a piano in the couple’s home. But instead of singing the lyrics Eagles co-founders Glenn Frey and Don Henley wrote in 1973, Goldsmith sings a refrain he and Moore wrote for their son, August.

“August Goldsmith, I think it’s time you tried sleeping,” Goldsmith croons in the clip. “But if there’s something you needed, we’ll be in the next room/ And if you’re dreaming, oh dreaming, dream of mommy and daddy/ Cause I swear boy it’s likely we’ll be dreaming of you.”

After more than a decade away, Moore returned to music in 2020 with her album Silver Landings. But she’s not the only singer-songwriter in the family. Goldsmith has served as the lead singer, guitarist, and songwriter of the folk-rock band Dawes since 2009.

The couple welcomed their first child together in February and revealed they’d settled on a super sweet nickname. "Gus is here," Moore said when announcing the newborn’s arrival on Instagram. "We were prepared to fall in love in all sorts of brand new ways, but it goes beyond anything we could have ever imagined," she added.

Moore later revealed that Gus had quickly grown into a tiny twin of his father, sharing the Dawes frontman’s expressive eyes and joyful smile. But while Gus may look just like his dad, he still shares a number of things with his mom.

Moore joked last week on Instagram that Gus “may be [Goldsmith’s] twin, but he sure does love a bath, just like his mama.” The This Is Us star shared an adorable snap of Gus smiling as his father bathed him in a baby bathtub.

Along with recording sweet lullabies, Goldsmith also made time to celebrate Moore over the weekend. The This Is Us star turned 37 on Saturday. “It’s this Supermom’s birthday today,” Goldsmith wrote in an Instagram post that featured an adorable photograph of Moore and Gus looking at each other as they laid side-by-side. “The one who is mothering a 7 week old, is back working again, and somehow still makes each of her animals feel individually loved and looked after.”

Goldsmith went on to call Moore “the nucleus of the family,” adding she “knows exactly what she wants our future to look like and then makes it a reality.”

“Love becomes a bigger word every day I’m in your orbit,” he added. “I love you more than I know how to say.”