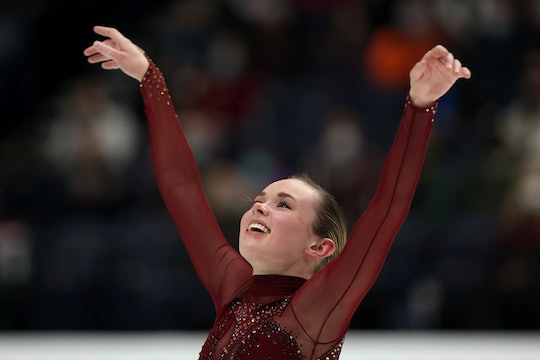 “Thanks for choosing to skate so I could follow.”

She will be the oldest U.S. Olympic women’s singles skater since 1928, after becoming the oldest women’s national champion since 1927 when she won her first national title this year at the U.S. National Championship. Bell currently ranks #8 and leads the US women’s figure skating team, with Karen Chen and Alysa Liu, who is the youngest figure skater in U.S. history, to land three triple axels.

But age is nothing but a number and Bell is ready to prove that in the 2022 Beijing Winter Games.

“It means nothing,” she told NBC Sports. “If you have a dream, there is no limit on the time you have to achieve that dream, for sure.”

She is the second oldest

Born on April 18, 1996, Bell is the second oldest daughter to Andy and Kendra Bell. She grew up in Tulsa, Oklahoma.

Her oldest sister skated with Disney

Bell isn’t the only one who skates in the family. Her older sister Morgan is also a figure skater and skated with Disney On Ice for six years. One of her star performances was Anna from Disney’s Frozen.

Today the oldest Bell sister is a figure skater coach and dog mom according to her bio on her Instagram page. In January, she posted a throwback photo of her and Mariah on the ice as kids.

Prior to that post, Bell posted a touching tribute to her older sister, thanking her for being the role model she needed on ice.

Her boyfriend is a figure skater too

Bell is in a loving relationship with Romain Ponsart. The French figure skater is a six-time French National medalist, 2012 Triglav Trophy bronze medalist, and 2015 Toruń Cup champion. Last year, the 29-year-old announced his retirement and plans to become a figure skater coach and open a school.

She refers to her coach as her ‘fairy godmother’

Bell’s coach Adam Rippen has seen her through her lows and highs. He helps her with training and conditioning. She calls him her ‘secondary coach’ or ‘fairy godmother,’ behind her other coach, Rafael Arutyunyan.

The two share an age history in common. Before Bell, Rippen, at the age of 28, was the oldest U.S. Olympic rookie singles skater since 1936, according to NBC Sports. He made his last appearance in the 2018 games. Since then, Rippen has been the fairy magic in Bell’s corner.

“Our goal is to go there and for her to show that being 25 is amazing,” he said via NBC. “That you can be 25, and you can be in the best shape of your life.”

She is also a dog mom

Bell is a dog mother to a German Shepard named Nala and has several doggone cute photo ops of them together on her Instagram. We don’t think Nala Bee is joining her in China, but maybe someone like her sister, who is also a dog mom herself is looking after her.

More Like This
Raven’s Chosen Family
'Clueless' Is, Like, Totally Still A Good Teen Movie In 2022
Catherine Reitman Calls It Like She Sees It: “Being A Working Mother Is Impossible”
10 Ways Prince George & Prince Louis Are So Different From Each Other