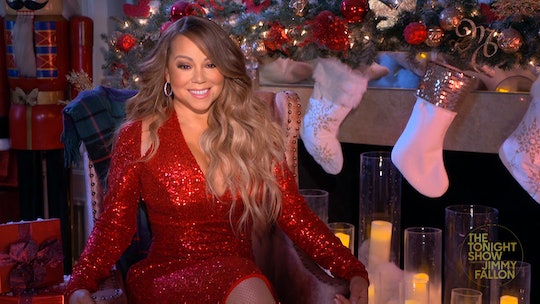 “If anybody would be the ‘Queen of Christmas,’ that would be Mary.”

Over the years, many of us have been guilty of giving the title of “Queen of Christmas” to Mariah Carey. And with her timeless hit “All I Want For Christmas,” which has been infused in our department stores, homes, cars, and solo spotlights in our showers, who could blame us for calling her that? But Carey has said she is anything but the queen, that title belongs to someone else.

The Christmas Princess author set the record straight on a Dec. 7 appearance on The Late Show With Stephen Colbert. “First of all, may I say I never called myself the 'Queen of Christmas',” she interrupted Colbert when he called her that. “Can we please be clear on that?”

Colbert replied saying, “I never accused you of that.”

Carey responded, “You did not, my friend, but others have.” She added, “They can look up every interview I’ve ever done, and not to get super religious, but I was like, ‘I think, like, if anybody would be the ‘Queen of Christmas,’ that would be Mary.”

Some viewers on social media had their own speculations on which “Mary” she was referring to. One viewer on the gossip site, The Jasmine Brand, who also posted the story on their Instagram wrote, “I’m sure she wasn’t talking about Mary J. Blige,” referring to the R&B singer. Another commented, “Mary who. JESUS’S MOM??.” One more responded, “She’s talking about Jesus’ momma yall.”

The exchange comes less than a month after the U.S. Trademark Trial and Appeal Board denied her petition to trademark the name “Queen of Christmas”; she was “rejected and denied” her requested trademarks of "Princess Christmas" and “QOC.”

Christmas music artist Elizabeth Chan, who has had the nickname “Queen of Christmas” for years has been labeled “the world's only full-time Christmas music recording artist,” according to USA Today. “Christmas is a season of giving, not the season of taking, and it is wrong for an individual to attempt to own and monopolize a nickname like Queen of Christmas for the purposes of abject materialism,” Chan told the outlet. “As an independent artist and small business owner, my life's work is to bring people together for the holiday season, which is how I came to be called the Queen of Christmas. I wear that title as a badge of honor and with full knowledge that it will be - and should be - bestowed on others in the future.”

Nonetheless, the legal situation and name mix-up are in no way dampening the singer’s holiday spirit. “I just happen to actually really love Christmas,” she told Colbert. “Because I grew up and had kind of a tough childhood, and I always wanted Christmas to be perfect, and it never was. So then when I was able to finally provide myself and my friends and then later now my little kids who are 11 ... we have the most festive Christmas ever.”

The singer’s holiday performance, Mariah Carey: Merry Christmas To All will premiere on CBS on Dec. 20 at 8 p.m. ET/ 5 p.m. PT and will be available to stream live and on-demand via Paramount+.