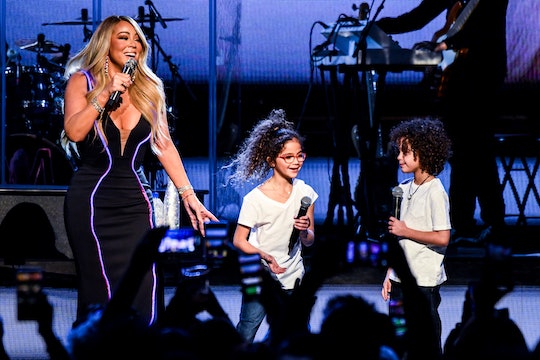 “I'm so thankful that they inherited that from me.”

It seems Monroe and Moroccan are taking after their superstar mom, Mariah Carey. In a recent interview, Carey opened up about her 11-year-old twins’ impressive musical abilities, and, honestly, is anyone surprised?

“Rocky is a technical genius,” Carey, 52, told E! on Monday at the Moët & Chandon Holiday Celebration. “He could do anything he wanted, and I will support him. He and Roe are both such creative geniuses! Honestly their tone, when they sing, is so beautiful, and I'm so thankful that they inherited that from me. I can't wait to see what and who they grow up to be!”

Carey went on to dish that she is in no form a stage mom, but she was excited when the twins wanted to join her for her Macy’s Thanksgiving Day Parade performance. Monroe and Moroccan did a cameo as background dancers while she performed her hit holiday song, “All I Want For Christmas.”

“When they want to be involved and feel like it will be something fun, they show up, attend rehearsals, and get really into it,” she added in the same interview. “It's such a joy to be able to watch them when they're fully engaged, relating to their other friends — many of which are aspiring singers or dancers who weren't born into the entertainment world.”

Carey shares Monroe and Moroccan with her ex-husband, Nick Cannon. The twins are the oldest of his 11 children, with a 12th one on the way. The Christmas Princess author reportedly told The Masked Singer host recently that she wants him to “carve out” more time for the twins, according to Radar Online. A source told the outlet that Cannon “thinks it's crazy wonderful having all these kids” and is prepared to meet the needs of his big family.

The couple separated in 2014 and have kept a cordial relationship since then. Nonetheless, Monroe and Moroccan clearly get their talents honestly from both parents. Cannon is an accomplished artist and actor himself; so the potential to follow in their parents’ creative and famous footsteps is very high!